Dachshunds have two types recognized by the AKC so wondering can you breed a mini dachshund with a standard is a first step in furthering the breed. Wanting to let your dog make puppies has a series of responsibilities attached to it.

The name of these two types of dachshunds implies a difference in size only but there is more to know about them. Their appearance is quite similar as they both display the same generic physical appearance. The loveable dachshund with its cute nickname of hot dog is a beloved breed around the world.

Can You Breed A Mini Dachshund With A Standard?

Mostly size seems to be referenced describing a standard dachshund and a mini. When it comes to breeding could these two versions of dachshund produce a healthy litter?

Differences Between Standard and Mini Dachshunds

The standard dachshund next to the mini is unmistakably smaller. Mini doxies have a height of 5 to 6 inches to their withers, while the standard has 8 to 9 inches. On a genetic level, mini could have other breeds markers, as terriers and pinschers were used to make a smaller doxie.

Miniature dachshunds are known to live longer than a standard. The physical build of doxies with their long backs means that they are prone to have spine issues. With a smaller frame, the miniature dachshund has fewer back problems, mainly due to less pressure exerted on their backs.

Read more about: How Old Does A Female Dachshund Have To Be To Breed?

Depending on which size doxie one may have, it’s normal to ponder can you breed a mini dachshund with a standard? Each one of the two types of doxies can breed with each other and produce either one of these types.

Keep in mind that if wanting a certain type of dachshund, then mixing them would make for more unexpected results. There is also the question of can two standard Dachshunds make a mini?

Dachshund mating can produce either size variation no matter which two variations are involved. There is also the possibility of any of these dachshunds to make an even smaller version which is affectionately referred to as a tweeny dachshund. This last variation, however, is one not officially recognized by the AKC.

A mini dachshund could possibly have a rabbit doxie as a parent or have genes from one. If the potential breeding partner of such a mini doxie would be a standard version, then the possibility is there.

Regardless of either the standard or mini dachshund, pregnancy is something that needs to be considered carefully. By this point it’s not only about can you breed a mini dachshund with a standard, but about offering care.

Pregnancy, or gestation period in dogs usually lasts about 9 weeks, give or take a few days. Talking with a vet for future trips to monitor the pregnancy would be required. It would also be a good idea to have all the necessary vaccinations before the pregnancy starts.

Creating a special place with a warm fluffy blanket is a good way to prepare for a pregnancy. A pregnant dog could start displaying nesting behaviors. Providing a space like that, in a quiet spot will help your dog feel safer.

The Size Of A Dachshund’s Litter

Typically, dachshunds have somewhere between four and eight puppies. Certain factors could influence the size of a litter, such as the age or size of the dog, and even the insemination method. Mini doxies could have fewer puppies than a standard would, mainly due to size. 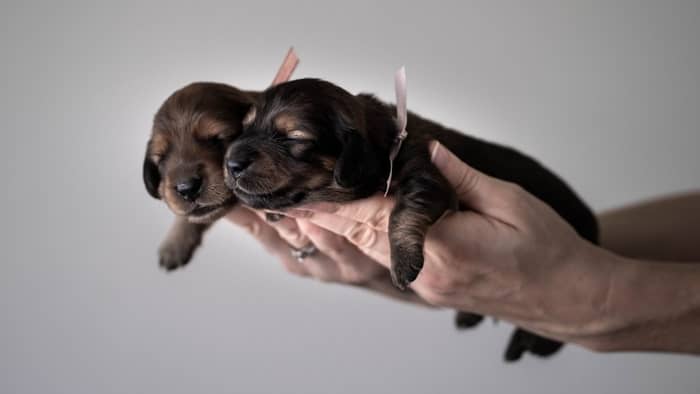 Read more about: How Many Litters Can A Miniature Dachshund Have And What’s Their Average Size?

Fluctuating hormones will possibly cause behavioral changes. A pregnant dog may seek out comfort from its owner more than ordinary. Wanting attention could indicate a potential pregnancy.

It can also go in the other direction, and a gestating dog will want solitude. Irritability and anxious behavior when trying to provide attention is another change that could donate that a dog may be pregnant.

Appetite will also fluctuate depending on which stage the pregnancy is at. The beginning may come with some vomiting and slowly begin to increase their appetite. Discomfort from pregnancy can even make a dog lose appetite, and hormonal imbalances only make this worse.

Dealing With A Pregnant Dachshund

Suspecting your dog may be pregnant should come with a confirmation from a vet. Doing this usually implies booking an ultrasound for your dachshund. Usually, 25 to 45 days into the pregnancy is the best time to go and get the correct results.

Blood tests are also done in order to detect certain hormones that reveal a dog is pregnant. Reaching 30 days into the pregnancy is when this test is best to take to be able and detect the relaxin hormone that indicates gestation.

Answering the question can you breed a mini dachshund with a standard is but the beginning of the pregnancy process. There are some key things to consider before a dachshund’s pregnancy. For one, knowing as much as possible about the process is important.

Considering there are two official types of dachshunds, wondering which of these two would come from pregnancy is understandable. Veterinary support will offer the best advice and make everything less stressful.

Can you breed a mini dachshund with a standard?

A miniature doxie can very easily produce a litter of puppies with a standards sized dachshund. The two varying sizes are very similar to each other. The smaller version was bred to hunt smaller vermin.
As such would have genetic markers from other breeds, like terriers and pinschers. On a basic level, the breed is only differentiated by size in those two versions and not congenital heritage. On the breeding aspect of it, there is nothing to indicate the mini and standard dachshund can’t produce a healthy litter.

It’s possible for two standard doxie to make only mini or only standards sized puppies. Depending on their gene pool each size can produce any of the other doxie variations and vice versa. There is also the even smaller version of doxie known as a tweeny or toy, which is also influenced by genetic inheritances.

Can two standard Dachshunds make a mini?can you breed a mini dachshund with a standarddachshund matingstandard and mini dachshundstandard dachshund next to mini
Share Pin Tweet 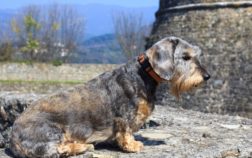 Last Updated on March 5, 2022 by Sam The bark of a dog is used by many as an indicator to their mood. They … Read More