Dachshunds are fun-loving dogs that like to lick everything! But why do dachshunds lick their paws, and is this a sign that they have a problem? Let’s find out!

Why Do Dachshunds Lick Their Paws?

All dogs lick their paws, as it is part of their normal grooming routine. You will notice that dogs tend to spend more time licking some areas of the body than others, and the paws are one of these sites that tend to get a lot of attention. But is there dog licking paws meaning, or is it just a habit?

When a dog licks its paws it is normally trying to get dirt and debris out from between the toes and pads of the feet. If you look at the underside of a dog’s foot, you will notice that it has some fleshy pads. These pads are come into contact with a lot of dirt and grime as the dog walks around, and the dog will lick its feet carefully to remove it.

The pads of the feet are also one of the few areas of a dog that can become sweaty in hot weather or during intense exercise. Dogs will lick their feet to remove this sweat and keep their feet clean.

But while some paw licking is completely normal, excessive licking and chewing can be a sign that your dog has a problem. Some dogs will lick one paw much more than the others, while other dogs may spend a lot of time licking all its paws.

What Should I Do If My Dog Keeps Licking Its Paws? 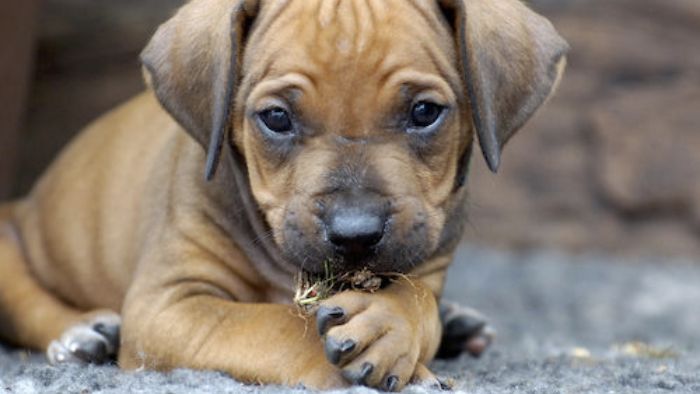 Excessive licking of one paw is a sure sign that something in that paw is making the dog uncomfortable. This could be an injury, such as a cut or graze, or a foreign body stuck between the toes. A sting from an insect such as a wasp or bee can also cause a dog to lick its paw more than normal.

If you can, try and take a look at the paw your dog is licking – take care, as it could be painful for your dog! If you see any wounds, blood, swelling, or discharge, take your precious pooch along to the veterinary clinic to be checked out.

A dog that chews all its paws excessively can be a bit more complex to figure out. It could be that something is irritating the skin of the paws, such as an environmental pathogen or parasite. Skin problems such as dermatitis can cause excessive itching of the paws, and these can be triggered by food intolerance or allergies.

However, your dachshund may just be licking its paws out of boredom! These little wiener dogs like to be at the center of family life, and will soon develop behavioral problems if they are bored. So, if your veterinarian cannot find a reason for the excessive paw licking, you might need to investigate whether your dog’s lifestyle and living conditions are the problem.

Why Do Dachshunds Lick People So Much?

It is no secret that dachshunds love people – these little dogs will happily spend all day long with their favorite humans! But why do dachshunds lick people so much?

It is very common for dachshunds to try and lick the face of family members, and this is thought to be a sign of affection. Your dog is licking you in an attempt to reinforce your relationship bond – no matter whether you find this adorable or a bit yucky!

Dogs also lick other dogs and people as a sign of submission, and it is thought to soothe and comfort the dog in times of stress. Licking is a key way in which dogs communicate, and this behavior is learnt from a very young age when a mother licks her newborn puppies.

So, just as we stroke dogs as a form of greeting, they will lick us to say hello right back!

Why Do Female Dogs Lick Themselves So Much?

You may notice that your female dachshund tends to spend a lot of time licking her genitals, but is this a problem? Or is it completely normal?

A moderate amount of self-grooming of the genital area is completely normal, as dogs will lick themselves to keep clean and hygienic. This normally happens after the dog has gone to the toilet, particularly after urination.

If your female dog is constantly licking her genital area, this can be a sign of a problem with either her urinary or reproductive tract. Check the area carefully for any discharge, or signs of inflammation such as reddened skin. It is also a good idea to monitor for other symptoms such as difficulty urinating or rubbing the genital area on the floor.

If any of these signs are observed or you have any other cause for concern, it is vital to seek veterinary help straight away. Urinary or reproductive problems in female dogs can become serious very quickly if left untreated.

So, as we have learned, dachshunds will lick their paws as part of their daily grooming routine, but excessive dachshund licking may be a sign that your dog has a problem. If your dog is constantly licking and chewing its paws, it is a good idea to get it checked out by your veterinarian. Dachshunds also love to lick people, and this is thought to be a sign of affection and submission! 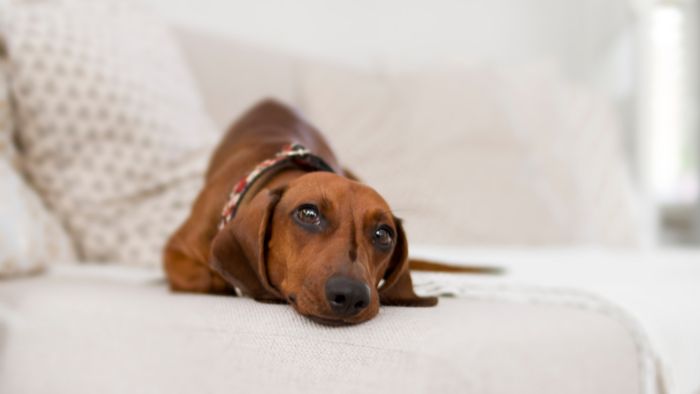 We would love to hear your thoughts on why do dachshunds lick their paws! Are you worried that your dachshund seems to lick one paw much more than the others, and worried that it might have a problem? Or perhaps you’ve got some questions about how to keep your dachshunds paws in good condition? Leave a comment below and we will get back to you! 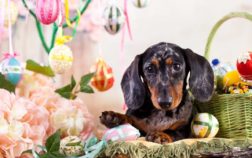 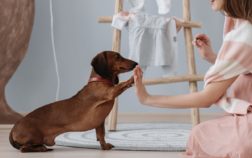 Last Updated on July 11, 2022 by Cristina Miniature dachshunds often frustrate first-time owners with their stubbornness. So, here are our 5 tips for … Read More 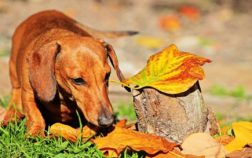