Everybody loves a fat sausage. Fat sausage dogs can have some health problems, however. A fat long-haired dachshund, in particular, is very common compared to other Doxies.

The reason is quite simple too – long-haired Doxies can hide their extra weight with their luscious long coats. That’s akin to the difference between an overweight person wearing loose or body-fitting clothing. So, a fat long-haired dachshund – how can you tell if your Doxie is overweight and what should you do about it?

How Does A Fat Long-haired Dachshund Look?

So, how can you figure out if you have a fat long-haired dachshund on your hands? There are two very simple methods – with your scales or by the touch. And, no, you don’t need the specialized pet scares vets have – your own human weight scales can work too.

How To Use Scales To See If Your Dog Is Overweight?

When measuring their dogs, many people face the unsurprising problem of their pets refusing to stand still on the scale. The solution here is very simple:

Of course, you will need a fairly precise weight scale for this, especially if you have a miniature dachshund. If your scale has a margin of even just a pound or so, it won’t be good enough. Alternatively, if you have a kitchen scale, you can just place a large enough bowl on it, zero the scale, and place your Doxie in the bowl.

Now that you know how much your dog weighs, what do you compare that with, however? Well, the expected weight of an adult Standard dachshund is up to 30 or 32 pounds at most (13.5 to 14.5 kg). Anything above that would be considered being overweight. For Miniature dachshunds, the maximum is 11 pounds or 5 kg. Older/senior dogs can be heavier than midlife adults but even they shouldn’t be over those ranges. 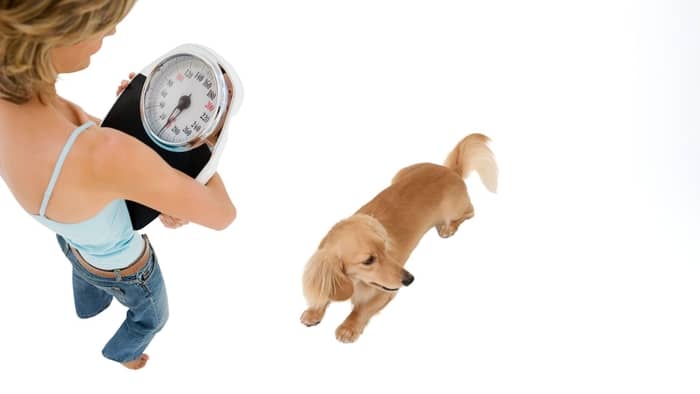 Learn more about: How Much Food Should A Dachshund Eat?

How To Spot A Fat Long Haired Dachshund Without Scales?

If you don’t have precise enough weight scales at home and you don’t want to go to the vet just for that, there are some good eyeball and touch methods too.

First, take a look at your dachshund directly from above and then from the side. Does the dog have a noticeable waistline? With a long-haired dachshund, this test can be tricky as the hair will be an obstruction. However, you can help yourself with your hands – feel the dog’s waist without pressing it in. There should be a definite tuck behind the ribs and before the hips. If not, your dog is a bit overweight.

The next test is to gently feel your dog’s ribs through its coat. If your dog isn’t too fat, you should be able to easily feel and even count each rib. Of course, the ribs shouldn’t be too noticeable as that’d mean that your dog is actually underweight.

Why Having A Fat Long Haired Dachshund Shouldn’t Be Ignored?

Fat sausages are incredibly adorable but they also inevitably start developing myriad different health issues as they grow. The biggest example is Intervertebral Disc Disorder (IVDD) – the back problems that a minimum of 10% of dachshunds experience when they get older.

And then, there are all the other issues you’d expect from any overweight dog such as heart problems, diabetes, and more.

So, A Fat long Haired Dachshund – How To Identify and Then Help It?

Spotting a fat Doxie is fairly easy, either by feeling its ribs and waistline or just by measuring it with your weight scales. What do you do if you see that your dachshund is overweight, however?

The first thing is to go for a quick and routine vet visit. This is done just in case, to see if there aren’t any other hidden issues you might want to get ahead of. Of course, your vet will also give you the best-personalized weight loss tips for your dog. The general advice, however, is quite clear – modify your dog’s diet a little bit and introduce some more exercise while still being careful not to over-exhaust your dog.

Why is my Dachshund so fat?

Dachshunds do have a tendency to become overweight – more so than some other breeds. The reason is simple and twofold – they are extra food-motivated and they also don’t do as much exercise as other dogs as they get exhausted quite quickly.
Still, this issue isn’t entirely unique to the dachshund and isn’t something unmanageable. As long as you just keep an eye on your dachshund’s diet and give it enough playtime and measured exercise, everything should be all right.

Is my Dachshund fat?

The easiest way to figure out if your dachshund is fat is to just measure it. Adult Standard dachshunds shouldn’t weigh anywhere north of 30 to 32 pounds at maximum (13.5 to 14.5 kg) while adult Miniature Doxies are expected to stay below 11 pounds or 5 kg. Anything above these ranges can safely be seen as your dachshund being too fat.
If you’re having trouble measuring your dachshund’s weight, here’s an easy trick – first measure yourself, then pick up your dachshund and measure your combined weight. From there, it’s just a matter of simple arithmetic.

If you don’t have a scale at home and you want to eyeball your dachshund’s weight, here’s what you should be looking at. There are two easy things to check – do you see your dog’s waist and can you feel its ribs when you pet it?
Like people, dogs should have a waist – noticeable tuck behind the ribs and before the hips. It shouldn’t be too pronounced, of course, or your dog might be underweight. But if your dog doesn’t have a waist and its torso just looks like a nice round oval, that’s bad.
Next is the touch test. Just pet your dog’s ribs and see if you can feel and count them with your fingers. If you can’t, then your dog is overweight. If you can not only feel but you also see the ribs – then it’s underweight. Ideally, the ribs should be invisible to the eye but easily noticeable to the touch.

What is the ideal weight of a Dachshund?

An adult Standard Dachshund is expected to weigh up to 30 or 32 pounds at most (13.5 to 14.5 kg). A growing dachshund can be lighter than that with the typical range being 16 to 32 pounds (7 to 14.5 kg). Miniature dachshunds are much lighter and should stay under 11 pounds or 5 kg even as adults.

fat long haired dachshundIs my Dachshund fat?What does an overweight Dachshund look like?What is the ideal weight of a Dachshund?Why is my Dachshund so fat?
Share Pin Tweet

Last Updated on January 30, 2022 by Sam If you want to know how to potty train a dachshund puppy, read this blog. You’ll … Read More

Last Updated on September 12, 2021 by Marco Approximately 20% of people have some degree of altitude sickness and can’t tolerate high altitudes. Do … Read More