Dachshunds come with a great deal of pluses but there are a few things to watch out for as well. Specifically, they have the same barking tendency as other hound breeds. So, is your dachshund barking at strangers? Is it keeping you up at night? Here’s what’s causing this behavior and what to do!

Dachshunds aren’t supposed to be guard dogs yet they sometimes behave like ones when a stranger gets nearby. Why?

Simply put, because dachshunds are raised and bred to be quite “communicative”. They are a scent hound breed so their primary function has always been to hunt. However, scent hounds hunt in quite a different manner to sighthounds and pack hunters.

Instead of chasing down the prey at high speed and falling it themselves, scent hounds hunt by tracking the scent of the prey. Using their noses, they get into the burrow of their badger, fox, or rabbit prey and chase it out for the human hunters to capture or kill.

Occasionally, the hound has to scrap with the prey inside the burrow too but the main tasks of these dogs are to track a scent and to bark as much as possible. The barking here serves two functions – to scare the prey into its burrow and to alert the hunters where and how the hunt is progressing. After all, all this is usually happening deep in the woods.

So, long story short, dachshunds have a pretty strong instinct to bark – both to chance strangers away and to alert you of what’s going on.

Does This Mean That Dachshunds Are Good Watchdogs?

Pretty much, yes. Due to their size, they are far from the best guard dogs but they can make excellent watchdogs. This does beg the question, however, of do you want a dachshund as a watchdog or as a friendly and social pet? Because it is one or the other.

How To Stop Dachshund From Barking At Strangers?

The one word that solves this issue is Socialization. This is pretty much a must for all dog breeds but is especially crucial for two dog categories:

Doxies clearly belongs in the second category. So, even if you don’t plan on getting a second dog, another pet, or if you are not so social yourself, socializing with your dog is still a smart idea.

What Does Said Socialization Mean, However?

This is a very straightforward process. It involves getting your pup used to meeting and interacting with strangers and with other animals. It’s important to do this early in the dog’s life, preferably before it becomes sexually active. The easiest way to go about this is to invite people home from time to time – family members, friends, as well as people with dogs. It’s also good to have friendly interactions with other dogs and dog owners at the park. 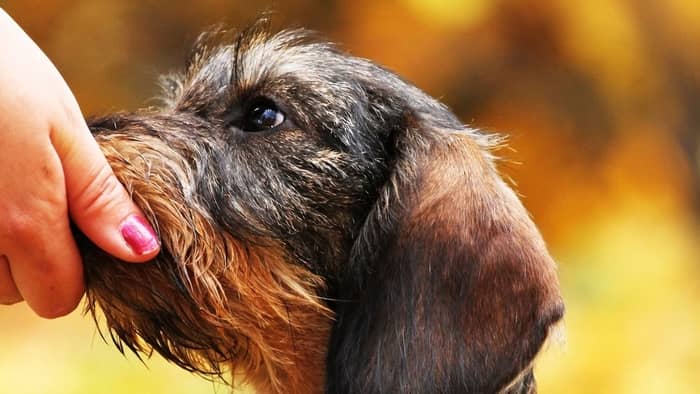 All this will help your dachshund learn that you aren’t the only “good human” and that it doesn’t need to bark at everything and everyone. Do remember that those socializing interactions need to be positive, however – giving some treats to your guests and friends to give the dog is an easy way to accomplish this.

Do Dachshunds Have “Small Dog Syndrome”?

Often called Napoleon Complex or Small dog syndrome, this is a behavior a lot of people associate with the smaller dog breeds. Small dogs do tend to bark at strangers and at other dogs a lot, however, this isn’t something inherent to them or their nature.

Instead, Napoleon Complex stems from the way people raise and train smaller dogs. Because such breeds are not as inherently dangerous as larger dogs, their owners tend to be more lenient when the smaller dogs misbehave.

Simply put, when a Rottweiler starts barking and growing, its owner is usually quick to raise their voice and scold the dog. And rightly so, Rottweilers can be quite dangerous if they are not trained well. If a dachshund starts growling, however, many owners make the mistake of just chuckling at how cute the little feisty Doxie is. And, sure – it is cute, but if you don’t teach that behavior out of the dog, it’s not going to stop. In fact, you can make it worse if you give the dog positive reinforcement.

So, socialize your dachshund, and don’t let it even learn to bark at strangers in the first place.

Why Do Dachshunds Bark So Much Even When They’re Alone?

Wiener dog barking isn’t contingent on another person or dog being nearby. As many dachshund owners can attest, Doxies often have the habit of literally just barking at the sky too.

The reasons behind this type of barking are usually much more universal and common for many dog breeds:

All these are things you can prevent by giving your dachshund enough time, attention, and exercise. Separation anxiety, in particular, is a common problem in all highly social and intelligent breeds, and the dachshund is no exception. Unfortunately, this is a bit more difficult to solve than just exercising your dachshund more. Although, that’s a part of the solution as well.

How To Prevent Your Dachshund From Barking At Home?

Separation anxiety is best treated by removing the “separation” part of it. Dachshund dogs are not a breed that does well on their own and it needs near-constant human presence. The way to solve this issue includes any of the following:

If the problem isn’t in the separation anxiety and your dog has simply developed the habit of barking at the mailman or the neighbors, some no-bark training will be in order. This can be time-consuming but not impossible if you’ve already taught your dachshund to obey you. Socialize the dog with the triggers of its barking and don’t reward barking by giving your dachshund attention.

Read more about: How To Get A Dachshund To Stop Barking?
dachshund barking at strangershow to stop dachshund from barkingwhy do dachshunds bark so muchwiener dog barking
Share Pin Tweet 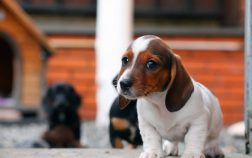 Toy breeds’ small size is cute but also crucial for their health. So, here’s what we know about the toy dachshund full-grown height, weight, … Read More 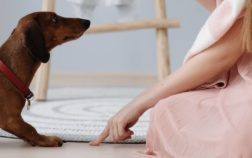 Doxies are adorable but also have a few personality quirks. For example, why are dachshunds so stubborn and is there a quick and simple … Read More

Dogs are easier to deal with than cats in many ways but potty training isn’t one of them. So, my dog peed on my … Read More