So, you’ve decided to breed your dog for the first time and have some questions. Like, how long are dachshunds pregnant for and what are the 7 stages of the pregnancy? What are the main signs to keep track of? Let’s go over the basics to make sure that your dog’s first pregnancy and labor go as well as possible.

How Long Are Dachshunds Pregnant For?

On average, a dachshund pregnancy – both for standard and miniature dachshunds – should last about 2 months or 2 months and a few days. Or, more precisely – about 63 to 65 days on average. In some cases, the dog may go into labor a few days earlier or later.

The most rare cases can have a dog go into labor on the 53rd or as late as the 71st day. However, that’s usually due to certain health pre-conditions and complications – talk with your vet ahead of time about those based on your dog’s medical history. Generally speaking, if your dog goes into labor before the 61st day or hasn’t gone into labor by the 66th day, it’s best to call your vet immediately.

The 7 Stages Of A Dachshund Pregnancy

So, with the question of how long are dachshunds pregnant for out of the way, let’s go over the main stages of a dachshund pregnancy. In general, the pregnancy is divided into 9-week-long periods as that’s how long it lasts – 9 weeks. However, weeks 2 & 3 and weeks 5 & 6 tend to be grouped in one stage each. So, what can you expect at each stage?

The ovulation will happen a few days after mating as the sperm fertilizes the egg. During the first week, you may notice your Doxie experiencing slight nausea and vomiting but that symptom isn’t always present. You can also expect to see some pinkish vaginal discharge which is also normal. Do keep an eye out for any infections that may have happened during the mating, however.

The fertilized egg will move and attach to the uterus during this second stage. Then, the new separate embryos will separate from the egg and start developing on their own. Meanwhile, your dog may start showing some behavioral changes such as getting more affectionate. Her nipples will also get enlarged.

During this week, the puppies become noticeable on ultrasound. Some potential abnormalities can also be seen if present so a trip to the vet is not a bad idea. The fetuses are about half an inch or 1.5 cm long in this period and their spines and eyes start developing. You should start feeding your dog about 50% more food on more regular meals. Talk with your vet about potentially switching to a more nutritious and protein-rich food too. You can expect to see more clear vaginal discharge from time to time.

The weight of the fetuses will increase approximately 75% during Week 5. They’ll start looking like “real” puppies on the ultrasound. The mother will become even more swollen and you should feed her often – small but more regular meals are greatly preferable to few but huge meals. Also, make sure that the dog is feeling well overall – avoiding stress is a good idea.

The mother will start shedding her belly hear during this stage – that’s perfectly normal. Talk with your vet about deworming the mother as the risk of the mother infecting her puppies with worms becomes a factor during the 7th week. At this stage, your vet may recommend switching back to your dog’s previous diet. 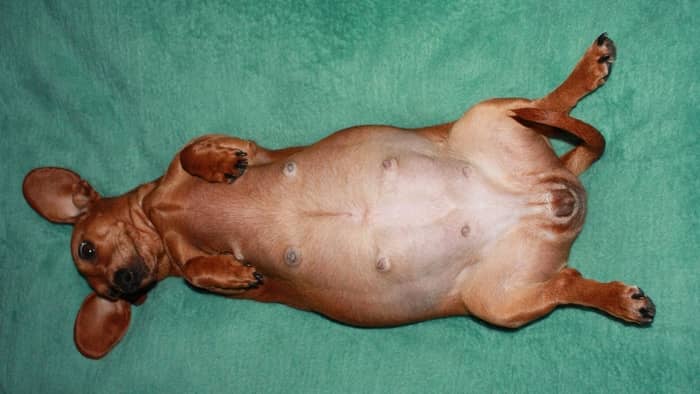 Learn more about: How Long Is A Dachshund Pregnant?

This stage marks the period of time during which your dog can go into labor at any moment. It’s still unlikely but it can happen. If all is normal, your dog will start nesting during this week and you may even notice the pups moving inside her belly

This is the week during which your dog will most likely give birth. She’ll settle into her nest and you should keep her calm, feed her as much as she wants, and measure her temperature regularly. Watch out for uterus contractions and vaginal discharge – those mean that the birth will be coming in a few hours. Contact your vet for more info and tips based on your dog’s condition and medical history.

So, how long are dachshunds pregnant for? About two months. If your dog is healthy, everything should go without a hitch. All you’ll need to do is help prep your dog’s nest, get some hygienic towels and a separate nest with an electric blanket for the pups, and keep the car keys nearby in case of an emergency.

Read more about: How Many Puppies Does A Dachshund Have?

How many puppies do dachshunds usually have?

How can I tell if my dachshund is pregnant?

You can sometimes tell if your dog is pregnant as early as the first week of the pregnancy. Some of the earliest signs you can notice there are mood swings, changes in the dog’s appetite, as well as nausea and the often accompanying vomiting. There can also be a bit of pinkish discharge coming out of your dog’s intimate area.
If you miss those signs or your dog isn’t exhibiting them at all – which isn’t that abnormal – you will notice some of the latter signs such as the shedding of the hair on your dog’s belly, the enlarged abdomen and overall weight gain, as well as the enlarged and/or discolored nipples. Unlike the earlier pregnancy signs, these ones are always present.

How many months is a dog pregnant?

Just over two months. The exact pregnancy timeframe is somewhere between 61 and 65 days on average. In rarer cases, it can be as short as 53 days or as long as 71 days. Both extremes are pretty rare, however, and necessitate consultation with your veterinarian. Pregnancy and birth-related health issues are not exceptionally common in dachshunds but they can happen. In general, if your dog starts going into labor before the 58th day or hasn’t gotten into labor by the 66th day, you should call your vet.

dachshund pregnancyHow can I tell if my dachshund is pregnant?how long are dachshunds pregnant forHow many months is a dog pregnant?How many puppies do dachshunds usually have?
Share Pin Tweet 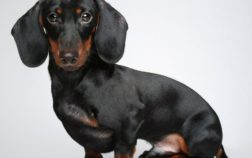 Last Updated on March 14, 2022 by Sam In recent years, the trend of designer pets has been growing at an exponential rate. From … Read More 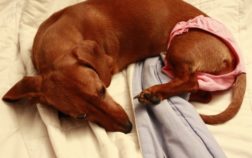 Last Updated on January 30, 2022 by Sam The average life expectancy of a dachshund is 12-14 years. Learn more about the breed and … Read More 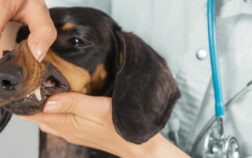 Last Updated on November 4, 2022 by Guillermina Dachshunds are famed for their beautiful white teeth, but just how many teeth do dachshunds have? … Read More