If you don’t know how female dogs go through heat, you may be in for a surprise. Here’s how long do dachshunds stay in heat and everything else you need to know. Below we’ll go over all the health risks and specifics you need to be aware of. We’ll also touch on the benefits of spaying your dachshund and all the timings and cycle terms to keep in mind.

Exactly How Long Do Dachshunds Stay In Heat?

A female Doxie will stay in heat for anywhere between 21 and 28 days at a time, so between 3 and 4 weeks. This doesn’t mean that she’ll be ovulating all that time, however. Instead, that usually lasts about a week and a half or two weeks. The ovulation is easy to notice when the color of the discharge changes from pink to colorless.

What Is The Dachshund Heat Cycle?

Now that we know how long do dachshunds stay in heat, let’s go over the cycle itself. There are 4 main stages to consider where with only two of those technically being part of the heat period.

What Are The Different Components Of A Dachshund’s Heat Cycle?

The four parts of every heat cycle include: 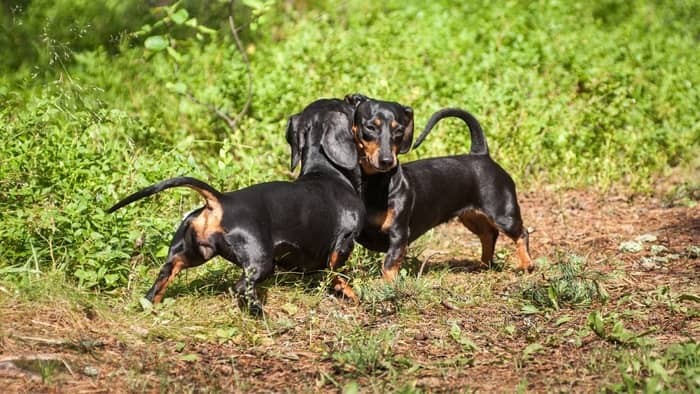 When Does A Female Dachshund Have Her First Heat Season?

Knowing how long do dachshunds stay in heat isn’t enough to be prepared. You should also be prepared for the very first cycle which usually starts between the 6th and 12th months of your dog’s life. In some cases, it can be delayed till the 15th month but consulting with your vet is advisable if the heat is that late.

How Often Does A Female Dachshund Get Into Heat?

Typically, your Doxie will get into heat twice a year. Given that we tend to keep our dogs indoors and under the same climate conditions year-round, it’s possible that your dog also has just one or three cycles a year. The exact hormonal balance of your dachshund also plays a huge role in that. Still, it’s smart to share irregular heat cycles with your vet when you get the chance.

Should You Track Your Dog’s Heat Cycle?

While not necessary, this is a good practice to follow. All information is useful information when it comes to our pets’ lives and health. If nothing else, you’ll be better aware of your dog’s incoming heat cycle and try to plan your travels or other commitments and events around it.

What Are The Main Signs That Your Doxie Is Coming Into Her Season?

You can try “testing” too by swiping a clean piece of tissue or cotton over the dog’s vulva. Look for a pink discharge that’d indicate the start of the proestrus.

Typically, no, but some dogs can continue exhibiting signs of heat even after spaying. The usual cause of that is if the surgeon has accidentally left a part of the ovarian tissue. This is usually called Ovarian Remnant Syndrome.

When Do Dogs Stop Going Into Heat?

So, at what age do dogs stop going into heat? The surprising answer is that it doesn’t. Unlike people, dogs don’t have menopause. However, senior female dogs will start having heat less and less often over time. That’s simply because the lining of their uterus tends to get thicker and not so pliable over time. You shouldn’t start noticing this before your dog starts reaching its senior years, however.

Should You Wait For At Least One Heat Season If You’ve Decided To spay Your Female Dachshund?

This isn’t really necessary even though a lot of people recommend it. The only benefit of waiting for one cycle is that makes it easier to figure out when the next cycle is going to be. That’s useful because a dog must always be spayed during the anoestrus period – you don’t want to accidentally spay your dog just as the proestrus is starting.

Is It A Good Idea To Leave A Female Dachshund Unspayed Even If You Don’t Want To Breed Her?

Leaving a female dog of any breed unspayed is only ever a good idea if you plan on breeding. If you want your dog to both be unspayed and not be bred with males, then some very nasty health consequences will start happening after a few years. So, spaying is very useful for preventing:

So, How Long Do Dachshunds Stay In Heat, and Should You Spay Your Female Dachshund?

Female doxies will stay in heat for 3-4 weeks, normally twice a year. However, you really should spay them if you don’t intend to breed them.

Spaying is better for their health, for your overall life, and for avoiding strays. If you ever want a second dog, there are millions of adorable dogs in shelters and rescues waiting for adoption as well as myriad breeders and puppy mills who never stop breeding dogs anyway. 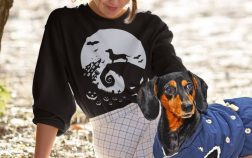 Last Updated on October 20, 2021 by admin Snuggling your Doxie sometimes isn’t enough to keep warm in the winter cold. So, you need … Read More

Last Updated on November 30, 2021 by Marco Many people today don’t realize that dachshunds were bred as hunting companions for centuries. So, what … Read More