Ear maintenance is one thing you probably didn’t expect to have to do as a dog owner. So, to help you out, here’s how to clean dachshund ears and why that’s so important. It’s easy to just skip this part of your dog’s grooming needs, and many people do exactly that. By the end of this article, however, you’ll see why skipping it is an especially bad idea with dachshunds and why cleaning your dog’s ears isn’t such a big deal anyway.

How To Clean Dachshund Ears?

Fortunately, ear maintenance really isn’t all that complicated. Ideally, you’ll just check your dog’s ears once a week and clean them when they seem dirty. For most Doxies, such cleaning shouldn’t be necessary more than once a month under normal circumstances. So, when should you clean your dachshund’s ears?

If you notice any or a few of these, it’s time to clean your dog’s ears. So, here’s how to clean dachshund ears:

And that’s about it. It really is neither complicated nor difficult, especially once you get the hang of it. All you need to do is keep the ear open with one hand, pick the cotton ball between your index and middle fingers, and do a broad sweep inside the dog’s ear. As long as you’re not using a Q-tip and you’re being gentle, there’s no way to harm your dog’s ear or eardrum with your fingers and a cotton ball.

Why Knowing How To Clean Dachshund Ears Is So Important?

Dachshund ears problems are not the main thing people talk about in terms of Doxies’ health, but it also isn’t something you should underestimate. Dachshunds have their signature long and droopy ears, which are a big part of their charm. At the same time, however, those ears make it very easy for the ear wax to build up without you noticing. They also capture and retain moisture which can be problematic, and they can even hide unwanted parasites you’ve picked up outside.

All this can lead to quite a few potential issues, which are very easily avoidable if you just check your dachshund’s ears from time to time and clean them when need be. Dachshund ear infection problems can be fungal, bacterial, or caused by the combination of parasites and retained moisture.

In any of these cases, treating the infection can either be “just” annoying and difficult, or it can be outright risky if you’ve left the problem unattended for too long. As in humans, ear infections in dogs can be dangerous because of how close they are to the brain. Eardrum ruptures are also possible after enough neglect. 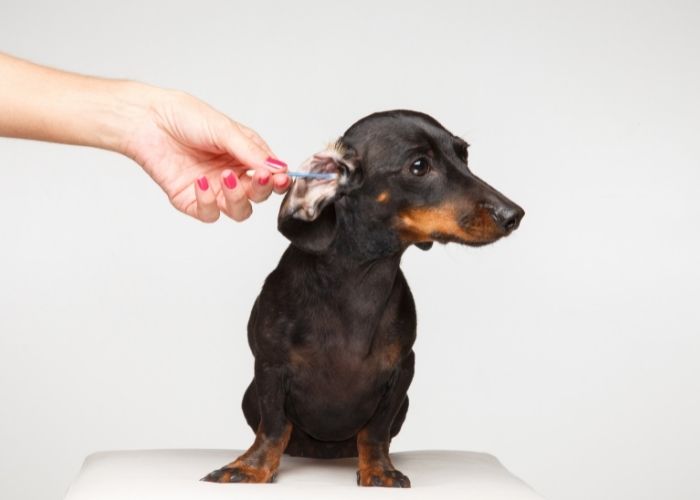 How Are Ear Infections And Other Problems Treated?

At best, treatment will include a medicated ear cleanser, antibiotics, and anti-inflammatory medication. At worst, the ear canal may have to be removed via a TECA surgery (Total Ear Canal Ablation). Needless to say, a TECA operation tends to leave the dog with either complete or severe hearing loss – something nobody wants to happen.

What About Dachshund Dry Ear Tips?

One more peculiar ear condition dachshunds can experience called Ear Margin Hyperkeratosis. It isn’t unique to dachshunds and can be easily identified by the crusty lesions on the edges and the outsides of your dog’s ears. Seborrhea in condition, it’s unfortunately not curable, but it can be treated and managed with various medicated prescription shampoos, various sprays and ointments, and some oral medications if necessary.

Other Helpful Tips For How To Clean Dachshund Ears

The most important tip, other than inspecting your dog’s ears for issues at least once a week is to start doing so early. Not only are puppies also likely to develop any of these problems, but it’s also great to get them used to the process as early as possible. Cleaning one’s ears isn’t necessarily an unpleasant sensation, but your dog can get freaked out by it if you’ve never done it before. Associating the cleaning with a positive experience such as pets, playtime, or a treat is also smart.

Another question that often arises is whether you should use a professional groomer’s help for something like this? While dog groomers do clean dogs’ ears alongside every other part of their bodies, it isn’t exactly sensible to get your dog to the groomer every month. Most dog owners visit their groomers twice a year, in the spring and autumn before the seasonal coat blowouts. That’ll still leave you with 10 months of ear maintenance at home.

In Conclusion – How To Clean Dachshund Ears And Why?

All in all, knowing how to clean dachshund ears is as easy as it’s important. This really is one of the easier grooming chores you’ll need to do, and it isn’t all that unpleasant either. If you do this regularly, your dog’s ears should remain clean at all times, and there won’t be that much gunk to remove or get on your fingers.

If you do skip a few too many weeks, chances are that earwax will accumulate and become quite unpleasant to remove (but even more urgent). So, just remember to toy with your dachshund’s big floppy ears from time to time and look under the hood.

It’s common knowledge that dog noses should be moist when they are healthy. So, what does it mean if your dog’s nose is dry, … Read More 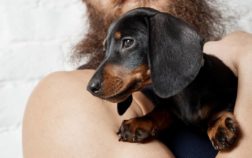 Preparing for a dachshund puppy or any new puppy that will come into the home, will need a little planning in advance to ensure … Read More

People often avoid certain dog breeds because of their grooming needs. So, let’s go over groomed long-haired dachshunds – the why, how, and when … Read More