Everybody loves a cool canine world record, be it for age, speed, bite force, or strength. So, that begs the question – who is the longest wiener dog in the world?

Finding the longest dachshund is actually a much harder task than you might think. We scoured the internet and found multiple claims of some phenomenally long Doxies but little proof to back them. Surprisingly, there isn’t an official Guinness World Record for longest dachshund.

We did find some interesting candidates for the title, however, and a lot of auto-generated articles that talked about actual sausages instead of “sausage dogs”.

How Long Is The Longest Wiener Dog In The World?

One contender for the title of the world’s longest dachshund is Hurricane Ike. This dog is Google’s official answer when you search up “longest dachshund” too. However, the actual length of the dog isn’t mentioned and there’s just a picture of it and a brief blog post. Ike does look pretty long in the photo but whether he’s the longest dachshund or not is difficult to verify.

There are also people on some message boards such as Quora who claim to have seen a 63-inch (160 cm) dachshund! If true, this would be an absolutely phenomenal length. We’d love to see some actual proof, however. Many other anonymous commenters on forums also claim to have 5-feet long (150 cm) dachshunds but, again, with little proof to back up their claims.

All this isn’t to say that there aren’t some abnormally long dachshunds out there – there certainly are. Take a look at this long boy on Pinterest, for example. However, again, we neither know exactly how long this dog is nor whether that’d make it the longest wiener dog in the world.

Simply put, we have no concrete answer to this question. If you have an atypically long Doxie, let us know below how long it is.

What Is The Standard Length Of A Dachshund?

Dachshunds come in many different types and sizes but here we’ll be talking exclusively about standard dachshunds as they are the largest of them all. Most of the time, an adult standard dachshund will be about 17 to 17.5 inches (43 to 44 cm) long from the start of the tail to the base of the neck.

If counting the whole length of the dog (from nose to start of tail) we’re looking at 21.5 to 25 inches on average (55 to 64 cm). If we are to add the length of the tail too we can get an even larger number but the tail isn’t typically counted.

These different ways to measure a dog’s length are likely why we see a lot of different lengths posted online. It’s very likely that many of the people who claim their dachshunds are 5 feet long measured not only the head, and not only the full stretched out tail, but even the length of the last hair on the tail too – we can’t really know.

What Is The Largest Dachshund In The World?

Finding the largest dachshund in the world is even more impossible than finding the longest dachshund. That’s because there are many XXL dachshunds out there that people often don’t brag about. Besides, while the length is a matter of skeletal structure, size, width, and heaviness are a matter of how overweight your dog is and that can change over time.

Still, to give you a clue as to how large a dachshund can get, here is Obie – a huge and grossly overfed dachshund who can barely stand on his own legs. While a normal standard dachshund will usually weigh somewhere between 16 and 32 pounds (7 to 14.5 kg), Obie has been measured to over 70 pounds and has reached a maximum weight of 77 pounds (35 kg) at one point in 2013.

Needless to say, this is absurdly unhealthy and you should never let a dog get even close to being this overweight.

Why Are Dachshunds So Long?

Dachshunds’ length isn’t an accident nor is it a byproduct of improper breeding. It isn’t a purposeful defect bred into these dogs to make them look cute either. Instead, it’s an intended benefit that allowed the breed to be as good of a hunting dog as possible.

Dachshunds were originally bred in Germany to be scenthounds. Their specialty was routing badgers, rabbits, and foxes out of their holes. In fact, the name “dachshund” literally means “badger hound” in German. So, the elongated bodies of this breed were bred intentionally to help them get into badger holes and move through them as easily as possible.

Dachshunds’ unique body shape, while intentionally bred by German breeders, was, at first, a genetic mutation. More specifically, it’s a condition called disproportional dwarfism or chondrodysplasia. It was only once breeders realized the condition could make dachshunds effective scenthounds that they started breeding these dogs intentionally.

However, it is a type of dwarfism nonetheless, and, as such, it does have some negative side effects. The effect of many of them has been minimized through careful breeding but the following health problems are still common in dachshunds:

Would You Actually Want To Have The Longest Wiener Dog In The World?

Owning a dachshund is a great pleasure regardless of the dog’s length. Whether your dog falls within the standard parameters of the breed or beyond them, it’s certain to give you a lot of great moments. However, you can expect more health issues the longer a dachshund is. Со, you will need to take even better care of the dog in those cases. 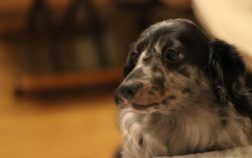 Last Updated on May 10, 2022 by Marco Dachshunds with long hair look quite imposing and a long haired blue merle dachshund has an … Read More

Last Updated on May 12, 2022 by Marco Dogs do need clothes, especially small pups such as mini Doxies. So, if you’re looking for … Read More 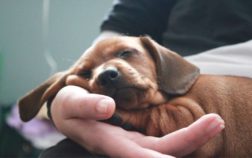 Last Updated on March 22, 2022 by Marco The dachshund breed has seen a soar in popularity, prompting many to enquire why are dachshunds … Read More