If you’re lucky to ever see newborn puppies, you’ll notice that their eyes are closed. Why is that? When can puppies see clearly and when do they open their eyes?

Puppy eyesight is a fascinating topic and it’s really more cute than it is worrisome. While puppies are indeed blind for quite some time after birth, they can’t really move too well either so there’s little risk of them falling or getting into trouble. Besides, their mother is supposed to always be around during that period, so they have all the protection they need.

When Do Puppies Open Their Eyes?

Puppies of most breeds will open their eyes somewhere between their 2nd and 3rd week. Sometimes, a puppy can start opening its eyes as soon as the 10th day but it’s perfectly normal if it takes a bit longer.

Slower opening of the eyes isn’t necessarily an indication of poor health or improper development and growth. However, smaller and weaker pups will indeed usually need some extra time opening their eyes, compared to their bigger and healthier siblings. Still, even that is ok, as long as the pup manages to avoid any health problems along the way.

Additionally, it’s very common for pups to open one time before the other. This is normal as well and shouldn’t be a cause for concern. The second eye will usually open several hours or a day later. 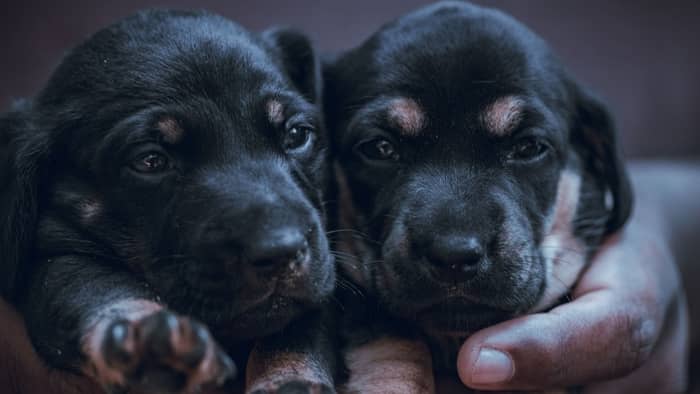 Why Are Dogs’ Eyes Closed After Birth?

This does seem like an evolutionary oversight at first glance. After all, we know that human babies are born with their eyes open, so why is that not the case with dogs? There are a couple of factors that go into that:

When Can Puppies See Clearly Compared To Other Senses?

Are puppies’ eyes the last sensory organ to develop? Not really. As late as their eyes open, pups will usually open their ears a couple of days later. The average for that is between the 18th and 20th day.

Should You Help Open Your Puppy’s Eyes?

Absolutely not! Trying to force a pup’s eyes open can only damage them. There’s no reason to do something like that as it’s perfectly ok if your pup needs a few more days to open its eyes. If the process is taking more than 3 weeks and/or you’re suspecting a health issue, just contact your veterinarian. But there’s no reason for you to try and open a pup’s eyes by hand.

When Can Puppies See Clearly?

The fact that a pup has opened its eyes doesn’t mean that it can now see as well as adults can. So, when can puppies see clearly? Usually, a pup’s eyes will completely clear between week 4 and week 5 after birth. That’s around the 1-month mark which is still quite good, all things considered.

For the couple of weeks that their eyes are open but not yet at 100% they will be murky and have a greyish-blue color. It almost looks as if there is milk poured into them.

Why Are Puppy Eyes So Blurry?

As puppies’ eyes keep maturing during their first month, the tapetum lucidum in the eyes goes through the most changes. The tapetum lucidum is the layer of tissue located behind the eye’s retina. It’s what helps dogs see clearly at night and it’s also what causes their eyes to glow green when you take a flash photo of them.

Additionally, dogs’ eyes also lack the color pigment melanin soon after their birth. This is the pigment that’s actually responsible for the color of their eyes. So, until it’s developed, puppies’ eyes are technically colorless. They only seem to have a greyish blue color because the light is reflected from the inside of the eye.

A dog’s eyes’ color can take up to 9 to 16 weeks or almost 4 months to fully develop and it will usually be black or dark brown. Still, as the change is gradual, it’s usually around the first month that dogs’ eyes have enough color pigment to stop being so blueish.

How To Care For Puppies Until They Can Start Seeing Clearly?

Now that we know when can puppies see clearly, the next question is what to do until then. It’s important to note that in that period, puppies’ eyes are vulnerable to light. So, if you have newborn puppies, you should keep them in a dark and dimly lit place. Letting them into direct sunlight is quite dangerous as it can hurt their eyes permanently.

In the wild, the mother will keep her pups 24/7 in their den. The pups can’t exactly move much at that age anyway, so all their mother has to do is keep them in, keep them warm, guard the den, and let them nurse off her.

Are There Health Problems To Watch Out For During The Puppy Eyesight Development Process?

Pups can be prone to eye infections if their environment isn’t clean enough. To avoid this, it’s important to plan out where the pups’ mother will look after them and make sure that the area is as clean as possible. From there on, just make sure that it remains clean.

Conjunctivitis and other eye infections can be quite dangerous for newborn pups and can even lead to permanent eye damage and blindness. Aside from maintaining a clean environment, you should also inspect the pups’ eyes for crust, tears, reddish skin, or other irregularities. If something feels out of order, call your vet. 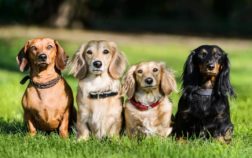 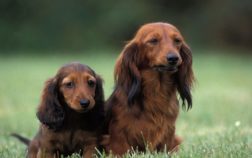 Last Updated on July 12, 2022 by Cristina Dachshund puppies may come in dozens of colors and patterns but few are prettier than a … Read More