When deciding to get a dog, people look for breed traits they like, eye color is among them and green eyes are the rarest but can a dog have green eyes? We gravitate to unique features in dogs, whether it’s breed traits, coat markings, or eye color.

As with humans, it all comes down to genetic alterations that get passed down every generation. Some genetic traits are selected by human intervention into a dog’s breeding pattern. Still, habitat factors can influence evolution and favor certain traits more than others, eye color included.

How Rare Are Green Eyes In Dogs

The most widespread eye color in dogs is brown, with many different shade variations. A lighter version of brown called amber is an uncommon eye color for dogs but not extremely rare. Blue is a stunning eye color in dogs and is far rarer than brown.

Green eyes are by far the rarest color in the world, not only among humans but dogs as well. Blue and green eyes both display, contrast with the dog’s pupil, making the similarity to the wolf that much more evident. It’s no wonder, since dogs are the wolf’s ancestor, and that can be evident sometimes.

How Can Dogs Have Green Eyes?

The rarity of the eyes aside, how can dogs have green eyes, when it’s so implicitly singular? Genetics plays the most important role in determining every aspect of physical appearance and so genetic mutations determine eye color.

The different shades of brown eyes are caused by a gene that produces a pigment called eumelanin in the iris. Other genetic factors are at play when blue, green, and even amber eyes appear in dogs. More specifically the merle gene is the one responsible for the amount of pigmentation.

Dogs with the merles gene might exhibit lighter pigmentation on the skin, coat, and of course eyes. In some cases, the two eyes can also display two different colors, along with patchy coat colors. Green eyes can be a byproduct of the merle gene in certain dogs, without the other ones that affect coat or skin colors.

Aside from typical factors the merle gene can influence, there is also the distinguishing difference in eye color. An extremely unique feature, akin to human heterochromia where each eye has a different color, one of which can be green.

The little sausage dog or dachshund is one breed that exhibits the merle gene in both eye color and coat discoloration. Pigmentation on the doxie fur is also called a dapple effect as it looks as though inkblots dot its coat.

The Welsh Corgi is commonly known for its fluffy coat and has been compared to a loaf of bread. It turns out the Corgi is another breed that can have green eyes. The Great Dane is a very large breed of dog, famous for its size and often compared to a horse. Less known about the Great Dane is the possibility of their having green eyes due to the presence of the merle gene.

The same merle gene is present in the Australian sheepdog, which also dapples its coat. Green eyes are rare with this breed, as blue eyes come more common, but chances are still high.

The highly energetic Weimaraner breed usually has golden brown or gray eyes, but can also have the rare green eyes variety. Chihuahuas are famous for being the smallest breed of dog and it turns out they can also have green eyes. A less known fact about the chihuahua other than its size and big personality. 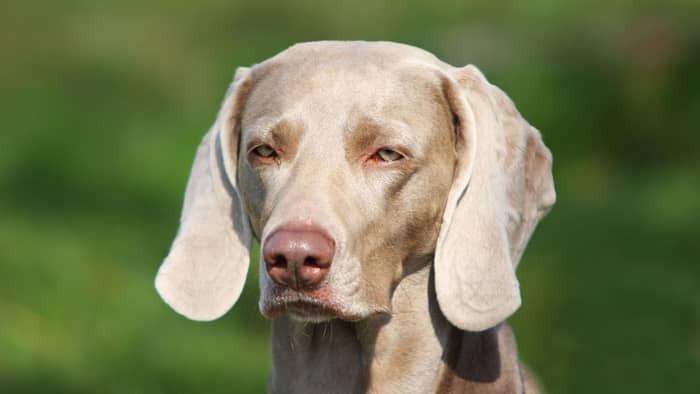 All puppies are born with blue eyes due to the eye pigment melanin which is not fully developed yet. Puppies with blue eyes have a captivating look, but their eyes don’t stay blue unless the color is inherited. Usually, most blue-eyed puppies have a change of eye color by the time they mature.

There are exceptions of course, most notably in huskies. Typically, huskies have blue eyes more often than not, but there are the rare ones that actually have green eyes. The recessive gene responsible for this is a different one from the merle gene but it has a similar outcome. Some puppies may display an eye color that appears green and matures into either a deeper blue or green. 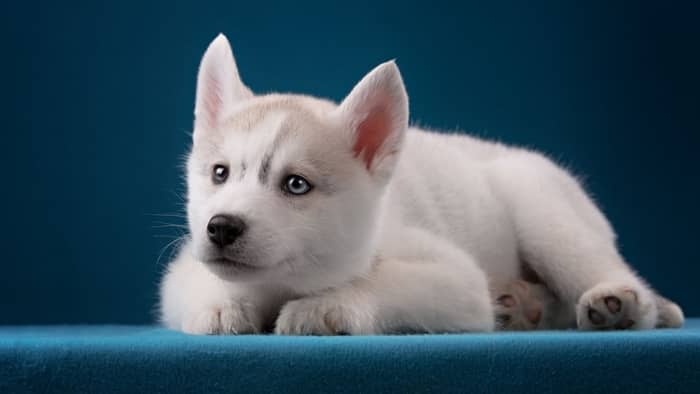 On an even more dramatic eye color transition, huskies can have brown eyes, which is an unusual color for them. The change from blue to brown is sometimes not completed and the result is a green-eyed husky. On some rare occasions, the bi-coloration can appear, which is a separate mutation from the merle gene in huskies.

As appealing as dogs with green eyes look, there may be some health issues involved with it. Some eye conditions are associated with the lighter shade of green, like colobomas, which is when the iris doesn’t develop entirely. Colobomas can develop at birth and has severe effects on vision.

The merle gene can as well trigger some issues like glaucoma. Treatments for glaucoma should be quickly undertaken as it can result in blindness. Close attention will keep a dog with this condition in good health for a happy life.

Other than problems with vision, dogs with green eyes might also have some hearing problems. Inner ear development is sometimes hindered by the gene that produces green eyes. This can result in minor to severe hearing loss in dogs that hold the specific gene.

Having a dog with distinctive green eyes is a beautiful addition to an already cute and loyal companion. Certain issues may arise from respective genes that produce these piercing eyes, but some may consider it worth it. Not all dogs possess the gene responsible for green eyes, but genetic tests can mark the gene’s presence.

Read more about: When Do Dogs Eyes Change Color 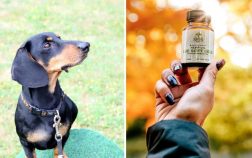 Last Updated on December 27, 2021 by Griselda M. CBD oil can be seen as somewhat controversial but more and more people are coming … Read More 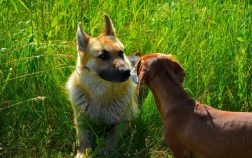 Last Updated on June 21, 2021 by Marco In the world of canine mixed breeds, there are a lot of peculiar combinations but few … Read More 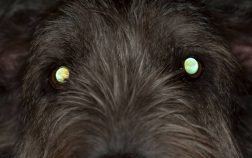 Last Updated on October 13, 2021 by Marco Have you ever wondered why dogs’ eyes shine in the dark? Here’s a quick dog eye … Read More