A dachshund with spots sounds undeniably cute but what type of coat is that? Let’s go over the dogs and spots dachshunds can have and why they are there. We’ll cover the coat types that will typically exhibit such coloring and we’ll also mention the less fun type of dots on your dog’s skin – moles.

The Two Main Types Of Dots and Spots Dachshunds Have

Dachshunds can famously come in dozens of different coat colors and patterns – we’ve gone over the 20 or so most popular ones here. Which of those are characterized with spots or dogs on their coats, however? The two we most often talk about are piebald and dapple dachshunds. So, let’s explain each type here.

What Is A Piebald Dachshund

We’ve talked about piebald Doxies in detail here but to give you a quick rundown – piebalds are dachshunds with numerous small white dots on their coats that give them a unique look. Those spots are caused by a unique genetic mutation that doesn’t affect the dog in almost any other way.

The one exception to that is the relatively minor risk of the dog having congenital deafness. However, this risk is only really present in piebalds that have over 80% of their bodies covered in white – the so-called “extreme piebald dachshunds”. All other piebalds are pretty accepted by kennel clubs and regularly bred by breeders. As this mutation is recessive, however, it’s not very common.

What Is A Dapple Dachshund

The much more controversial counterpart of the piebald is the dapple dachshund. These dogs also have white spots in their bodies but of a different pattern – typically larger white spots that can cover larger parts of the body pretty consistently. These dogs’ mutation is due to an entirely different gene than the piebald dachshund. 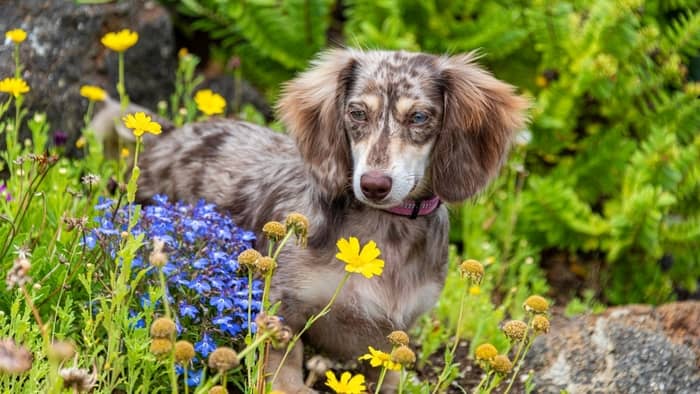 It’s bad because, like the extreme piebald dachshund, the double dapple does have some health problems that aren’t present in “normal” dachshunds. The two main ones are deafness and blindness, only the risk of them is greatly increased in the double dapple compared to any other breed and sub-breed.

As a result of that, the breeding and selling of double dapple dachshunds is strongly frowned upon by most, if not all, kennel clubs. And, even though single dapple dachshunds don’t have these health risks, their breeding is also often viewed as a bad idea as these dogs can later be bred with each other – whether intentionally or by accident – and produce double dapples.

How About Dachshunds and Moles?

Of the dots and spots you wondered if dachshunds can have are black and on their skin – yes, those are probably moles. Like all other dogs and like humans, dachshunds too can occasionally have moles. This doesn’t happen often, however, as canines seem to have moles less often than people. Plus, they are harder to see, especially if the dog has long fur.

Moles are, of course, generally harmless. Still, they are worth mentioning to your vet as they can rarely be cancerous.

So, The Dots and Spots Dachshunds Can Have – Are They Worth Noting?

If you’re being offered to purchase a dog that’s almost fully covered with white spots and dots – yes, it’s definitely worth noting what those dogs are. Piebald and (double) dapple dachshunds that have white fur over the majority of their coat are relatively likely to suffer from congenital deafness and even blindness in the case of double dapples.

So, while adopting such a dog is admirable and advisable, we’d advise you against purchasing it. Financing the irresponsible breeders that continue to breed dogs with an increased risk of deafness and blindness just isn’t a good idea for anyone involved.

Can Dachshunds have spots?

They can, albeit rarely. Most dachshunds are either single-colored or a bi- or tri-color combination of various colors such as black, tan, red, cream, chocolate, and others. There are also some gorgeous patterns such as brindle, sable, wild boar, and others. And, yes – there are a couple of spotty patterns too.
These are the notorious piebald and dapple dachshunds. Both are characterized with white spors (dapple) or dots (piebald) covering large sections of their bodies. These dogs are rare because the genetic mutations that lead to the white in their coats aren’t all that common. Additionally, many breeders don’t like breeding them because both dapples and piebalds can be born deaf if the white coloring of their fur covers 80%+ of their bodies. Dapples can be born blind too if they are of the “double dapple” variety, i.e. if they are the offspring of two dapple dachshunds. So, while there’s nothing wrong in adopting and caring for such a dog – whether blind/deaf or not – the purchase, selling, and/or breeding of these dogs is strongly condemned by most kennel clubs. Still, it’s worth noting that piebalds are much more accepted by dapples and especially their double dapple offspring because piebalds don’t tend to be blind and are more rarely deaf.

Do Dachshunds get moles?

A dachshund can indeed get moles on its body. In fact, every canine can and dachshunds don’t seem to do so more or less often than other canines. However, dogs seem to be less susceptible to moles than humans and, thanks to their fur, even when they do get a mole, it’s usually difficult to notice.
As with people, moles on dachshunds are usually harmless but can rarely indicate the formation of a malignant tumor. So, they are worth checking out every once in a while when you visit your vet.

What is a spotted Dachshund called?

Spotted dachshunds are usually of either the piebald or dapple variety. Both of these coat sub-types tend to have white spots on their bodies but of different size and covering different areas. Both types are also pretty rare as they are caused by rare genetic mutations. Adopting ones is fine but be wary of you want to buy one – the selling of these dogs is generally frowned upon as they can come with an increased risk of deafness or blindness. This is especially true of double dapple dachshunds – the offspring of two dapple dachshunds – or “extreme piebalds”, i.e. piebalds with 80%+ of their bodies being white.

Can Dachshunds have spots?dachshund with spotsDo Dachshunds get moles?dots and spots dachshundsWhat is a spotted Dachshund called?
Share Pin Tweet 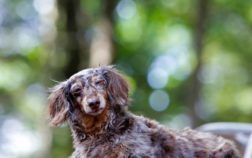 Last Updated on January 19, 2022 by Sam A Double Dapple Dachshund is a dapple-colored smooth-haired, long coat, and wire haired variety of the … Read More 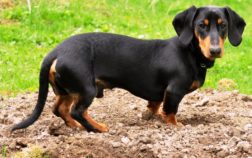 Last Updated on February 19, 2022 by Sam The lifespan of a Dachshund varies, but in general their average would be 12-14 years. The … Read More 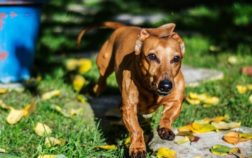 Last Updated on January 19, 2022 by Sam One of the fastest dogs in the world, this German breed is capable of running at … Read More