What Is An EE Red Long Haired Dachshund?

Seeing a red dachshund puppy is hardly a surprise – red is the most common color for dachshunds, after all! However, this doesn’t make them any less desirable or sought after, especially if they have some of that gorgeous dark shading red Doxies often sport.

And that’s exactly what an EE red long-haired dachshund is. The “EE” refers to the “E” series gene – that’s the locus in dachshund genetics that determines whether your dachshund’s coat is going to have any black pigment or not. As with other gene loci, the E series can lead to the following combinations:

The reason behind this is that “E” is the dominant locus whereas “e” is the recessive one. This means that as long as even one E is present, it will override the potential presence of a small-letter e and your dog will have black shading on its coat. If you have a red dachshund with ee loci, it will have a “clean” coat, meaning that it won’t have any black shading.

This doesn’t mean that it’s irrelevant whether or not your dachshund is EE or Ee – the difference is still significant if you want to breed your dachshund. If your dog has the Ee combination it will have a chance of passing on the recessive “e” gene rather than the dominant “E” gene. If it’s an EE, however, its offspring will always have at least one dominant “E” gene and will therefore always have black shading.

Shaded Red Or Sable – Which One Is Your Dog?

We used the word “shading” a lot but isn’t the EE gene supposed to refer to sable dachshunds? Indeed it is – it refers to both sable and shaded dachshunds. And, yes, these are two different coat types.

The difference is simple:

This difference can seem insignificant and is indeed sometimes difficult to distinguish, especially from afar. The way to tell for sure if a dog is sable or shaded is to pet it and gently lift up a portion of its hair to see if the roots are the same color as the tips.

Learn more about: What Exactly Is The Rare Gray Long Haired Dachshund?

By and large – yes. Breeders, experts, and many dachshund aficionados prefer sable dachshunds both for their looks as well as for the fact that they are rarer than shaded red dachshunds. This also drives up the sable dogs’ price by at least a few hundred dollars on average compared to the price of shaded red Doxies.

Aside from one coat color being rarer than the other, however, there isn’t any other significant difference between the two. So, if you don’t care much about those things, a shaded red long-haired Doxie can be just as awesome and also a very gorgeous pet as well. 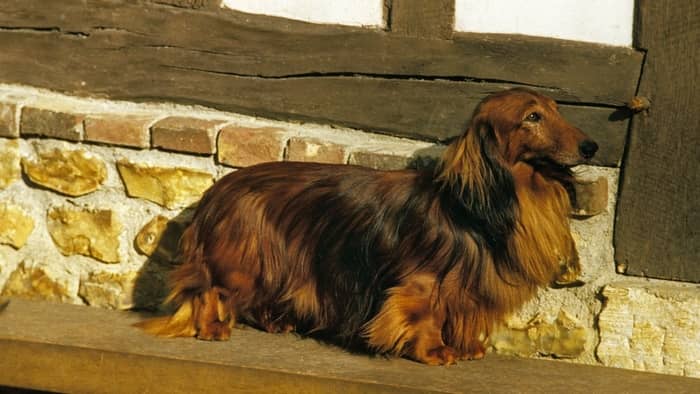 Read more about: What Is The Life Expectancy Of Long Haired Dachshund Dogs?

What is an EE red Dachshund?

The red color in dachshunds is determined by the presence of the dominant A series gene loci and it’s the most common gene/color in the breed. What is this EE red dachshund people talk about then? Well, just like the A gene series is responsible for the red coat color, the E series is responsible for the black color.
So, if your red dog also has a dominant EE gene locus, this means that its red coat is going to be sprinkled with black – either as an additional shading or in the very sought-after sable pattern where the base of your dog’s hairs will be red but the tips will be black.

Red long haired dachshunds can vary a lot in terms of price depending on some additional characteristics they may or may not have. After all, red long haired dachshund can have a clean (all red) color, it can have black shading, or it be sable and only the tips of its red hair will be black. There are other possible bi-color and tri-color coat combinations too, of course, but when talking about red dachshunds, people usually mean those three. And their prices do differ.
Clean red and shaded red dachshunds are fairly common for example, especially the shaded red variant. So, their price is usually closer to the average for the breed of $1,500 on the AKC marketplace, overall $400 to $1,100 across most breeders, or $100 to $300 for adoption from shelters.
Sable red dachshunds can be pricier as they are rarer and more sought-after, however. Finding a $1,500 sable dachshund will typically be fortuitous as they can often cost even up to or beyond $2,000.

The red dapple dachshund coat pattern is indeed one of the rarest coat combinations out there. This can seem weird as the red color is exceptionally common for dachshunds but that’s how genetics works. This is further compounded by the fact that dapple dachshunds are rare in general as many breeders avoid breeding them out of fear of accidentally leading to a double dapple dachshund – the rather sickly offspring of two dapple dachshunds, whether red or not.
This isn’t to say that adopting or even buying a (single, not double) dapple red dachshund is a bad idea – as long as they are not a double dapple, they shouldn’t have any extra health issues. Still, they are rare so finding one won’t be easy. 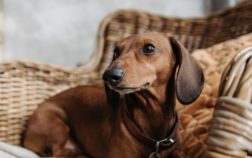 Last Updated on January 19, 2022 by Sam A miniature dachshund is a type of small dog that originated in Germany, and has been … Read More 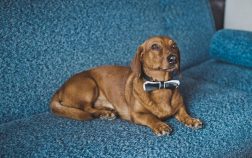 Last Updated on October 12, 2021 by Marco There are many reasons for and against letting your dog on the couch. If you prefer … Read More 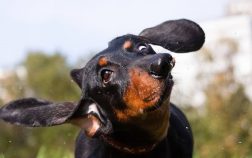 Last Updated on October 13, 2021 by Marco Dog ears come in dozens of different shapes and sizes. Floppy ears, however, are our fan … Read More