The standard tail of a purebred dachshund is long, relatively straight, and with a slight curve upwards. It doesn’t typically curve back too much, however, and it will rarely fall to the ground when the dog is active and alert.

In essence, the dachshund’s tail should extend backward from the body, making the dog look even longer than it already is. It’s also used very actively to emote so you can always tell how your dachshund is feeling by looking at its tail.

Keep in mind that the dachshund’s tail is not meant to be counted in the dog’s length. So, when someone asks you how long your mini or standard dachshund is, you’re supposed to measure from the base of the neck to the base of the tail, i.e. just the torso. Similarly, if someone tells you their Doxie is extraordinarily long, they are usually counting the long snout and the very long tail too.

Is The Long Haired Dachshund Tail Different From That Of Other Doxies?

Not really – it just looks different cause it has long hair coming out of it. The tail itself, however, is essentially the same.

That extra hair will need some grooming, of course. Long haired dachshunds need their hair trimmed every once in a while, especially behind the ears, behind and around the front legs, and under the paws. The tail is not as much of a priority but you can always lightly trim the hair there too with a few quick snaps of the shears.

What If My Long Haired Dachshund Tail Is Hanging Low Or Isn’t Wagging Too Much?

A dog’s tail is usually a good indicator for its mood so a hanging tail usually shows stuff such as anxiety, fear, or depression. If that’s the case, you should try and see why your dog is down and fix that in some way. Of course, the hanging tail can also mean that your dog is cold.

However, a hanging or inactive tail can also indicate physical distress and pain. With dachshunds, in particular, you should consider Limber tail and Intervertebral Disc Disease (IVDD).

Categorically no! People can argue about docking other breeds’ tails if they want, although we’re generally against the practice then too, a dachshund absolutely does not need its tail docked.

The reason some breeds’ tails are traditionally docked is to prevent work accidents. Doxies are not a working dog breed, however – they are a scent hound and a pet breed. Neither of these jobs requires tail docking. In fact, hunters value their dachshunds’ tails as they help pulling the dogs out of badger holes.

In conclusion, a dachshund’s tail is a wonderful extension of an already wonderful breed. It’s easy to maintain and will make both you and your dog very happy.

How do you cut a long-haired dachshund tail?

Grooming a long haired dachshund’s tail is fairly easy to do if you have sharp and safe hair-cutting shears. Just wash, dry, and comb the hair on your dog’s hair so that it’s falling straight down. Then, you can easily trim it down as much as you want and at an even line.

Are you supposed to cut long haired dachshunds hair?

Long haired Doxies certainly need their hair trimmed fairly regularly. This is especially important between the fingers, behind the ears, and around their feet. If you don’t trim your dachshund’s hair, matting will become more and more likely over time. Additionally, your dog’s hair will just become too long and unmanageable overall. Whether that trimming should be done once or twice a year, is up to you.

Do you dock dachshund tails?

Absolutely not. The only dog breeds that have traditionally had their tails dogs are some working breeds. The reason typically given was that long tails can snag on things, hurting the dog and leading to potentially deadly infections and diseases. Even that reasoning is largely being desputed today, however, as keeping your dog’s tail safe from work-related accidents isn’t actually all that hard. Not to mention that we can easily care for a dog’s tail nowadays.
With dachshunds, however, even that is a moot point as they are not a working dog breed. They are a scent hound breed and, more recently, a pet breed. And neither of these “professions” require tail docking. In fact, a dachshund tail is viewed as very useful for their hunting job as it helps the hunters to pull the Doxies out of badger holes. And the tail is just undoubtedly adorable for a pet.

What breeds make a long-haired dachshund?

The long-haired dachshund is a very old cross of the traditional smooth-haired dachshund and a few spaniel breeds. It is still almost entirely just a dachshund, however, so it isn’t in any way seen as a crossbreed. 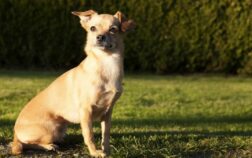 Last Updated on November 4, 2022 by Guillermina The dachshund cross chihuahua, or“Chiweenie”, is one of the most adorable crossbreeds around. But how big … Read More

Last Updated on November 30, 2021 by Marco If you’re a fan of smaller or even miniature dog breeds but want something unique, you … Read More

Last Updated on August 16, 2021 by Marco Dogs can be very different and often peculiar but few are weirder than the Great Dane … Read More