Doxies come in dozens of coat types, each with its separate price range. In this article, we’ll look into the mini dapple dachshund price and why are these dogs more expensive than other dachshunds. Is it the dapple (or merle) genotype that ramps up their price or the fact that they are of the miniature size variety? Or is it both? Or is it just a matter of these dogs being much rarer than other dachshunds?

What Is The Standard Mini Dapple Dachshund Price?

Giving a single number here is impossible as the mini dapple dachshund price can fluctuate by hundreds and even thousands of dollars per puppy. The average price range you’ll see goes from $400 to $1,500 but mini dapple dachshunds can cost even north of $2,000 from certain breeders.

Why Is The Average Mini Dapple Dachshund Price Range So Wide?

Dapple dachshunds occupy a very weird place in the list of dachshund coat types. On the one hand, genetically speaking, the dapple (or merle) Mm genotype isn’t rare or recessive. If these dogs were left to reproduce freely, there would be many more dapple dachshunds prancing around the world. 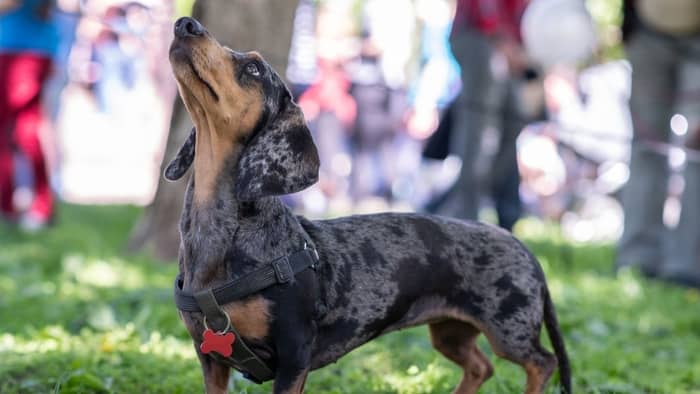 Learn more about: How Much Are Dapple Dachshund Puppies?

However, if we do that, there would also be many more double dapple (MM genotype) dachshunds as those are the offspring of two dapple dachshunds. And double dapples – while beautiful in their own right with even whiter coats – have increased health risks for stuff such as blindness and deafness.

How does this relate to the single (Mm) dapple dachshund’s price?

Where Should You Get Your Mini Dapple Dachshund From?

With all of the above being said, the single biggest factor in the mini dapple dachshund price equation is probably the breeder/store/shelter you’re getting your dog from. Let’s go over the 4 main options here:

So, as you can see, the mini dapple dachshund price can vary quite a lot because of this dog’s unique coat type and genetics. The most important factor price-wise, however, is where you get your dog from.

What is the difference between dapple and merle?

From a genetic standpoint – there is no difference. Both dapple and merle dogs have an Mm genotype – they have a single M (merle) dominant allele and an m (non-merle) allele. MM genotypes are double-merle or double-dapple whereas mm genotypes are non-merle.
The reason we typically use the term dapple for dachshunds instead of merle is that the Mm genotype in dachshunds expresses itself through white spots on the dog’s non-white coat. In contrast, other dog breeds with the Mm merle genotype have darker spots on their lighter coat. Both the merle and the dapple coat types are caused by the same gene, however, and both have the same risk – doubling the MM merle genotype results in a mostly white dog with huge risks for blindness and deafness.

Is a dapple Dachshund rare?

How do you get a dapple Dachshund?

Dapple dachshunds are bred from other dapple dachshunds, like any other dog. Presumably, at one point in the past, a genetic mutation caused the Mm merle genotype that causes the pretty dapple/merle coats of dachshunds and other dogs. That’s similar to how we got people with blonde hair some ~11,000 years ago.
But, if you want a dapple dachshund today, you’ll just need to breed another dapple (Mm) dachshund with a non-dapple (mm) dachshund. However, you should be very careful not to accidentally breed two dapple (Mm) dachshunds together as there will be a huge risk of a double dapple (MM) offspring. And these even whiter dachshunds come with significantly increased risks of blindness and deafness. 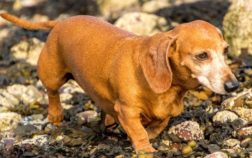 Last Updated on February 8, 2022 by Sam Dachshunds are known for their short stature, but there is no set weight range. Many tiny … Read More

Last Updated on July 13, 2021 by Marco Few dogs are better named than a Yorkie mixed with dachshund – the adorable Dorkie can … Read More 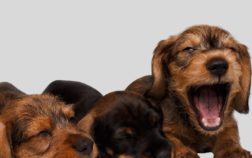