Dachshunds are a breed designed for hunting, and thinking about this we may question what do dachshunds hunt, as hunting dogs are usually bred for specific prey. Dachshunds are a very intriguing breed with their goofy appearance and eccentric demeanor at times.

We know the answer to the question do dachshunds like to hunt, seeing as the breed has a hunting history. This raises other queries regarding their behaviors, temperaments, and level of exercise. There is more than meets the eye with the dachshund and they may surprise any prospective owners.

Looking at a dachshund’s physique springs the question are dachshunds good at hunting? The selective breeding that has undergone doxies was one deliberately targeted for hunting. A dachshund’s body is particularly bred to hunt low to the ground and for borrowing animals.

The short legs of a doxie make it able to catch scents close to the ground. The elongated body combined with webbed feet lets it dig after prey and dive after it while easily fitting through. Behavioral traits were also actively bred into dachshunds to make them confident and brave and not back down during hunting.

Usually, standard-sized dachshunds were used for hunting in packs. This packing method allowed for multiple assault points to be established with borrow entrances and gave a great advantage. Even with the small frame of dachshunds, they are quite effective hunting dogs.

Modern times have made the dachshund more of a pet than a hunting partner to people, but their instincts remain. These instincts usually manifest in different forms of behaviors like digging in the yard.

Beyond the obvious long body and webbed feet, there are other unseen physical traits that make doxies good hunters. Some of these contribute greatly to the physicality of a dachshund and provide certain advantages.

Although the dachshund has such a small frame, its lung capacity is quite large. This is a positive thing because doxies can breathe more easily when making their way into borrows.

Since the dachshund is of the hound category, it has certain senses that help with hunting. Among these senses, the smell is the most prevalent but also hearing and the ability to feel vibrations.

A doxies claws in combination with the webbing of the feet make them great diggers. A powerful bark was perfect for the doxie to make its presence known to its owners while hunting. Training is usually hard for dachshunds, but being motivated by their prey drive would have made it a little easier.

What Do Dachshunds Hunt?

The name of the dachshund itself implies what it could have been bred to hunt. Its original german name primarily translates to badger hunter, which is true, the doxie was initially intended to hunt badgers. But this does not limit the possible prey a dachshund could hunt, and extensions of their hunting habits were known.

Smaller dachshunds like the miniature and the toy version were used to hunt rats, rabbits, prairie dogs, and squirrels. Depending on the region, the doxies could have hunted raccoons and opossum. In some cases, even foxes made on the list of animals hunted with doxies, especially with Jack Russell mix. 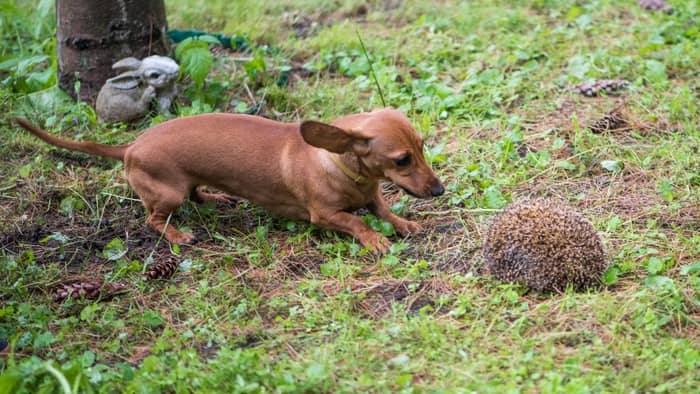 On the question of do dachshunds hunt birds, dachshunds could have been used to hunt pheasants. This was probably the case because pheasants don’t fly for too long or at a great altitude.

What was more interesting with dachshunds was that they also hunted in teams with falcons or hawks. This was more prevalent in the United States and the dog would chase off the small vermins while the birds would catch them.

Hunting Instincts For A Dachshund In The Modern-day

Hunting with animals is not so much of a necessity now, and dachshunds still have their prey drives. To deal with these high-energy bundles of joy, they will need some proper care. Besides knowing what do dachshunds hunt, findings ways to supplement these needs is necessary.

It’s important to take them on daily walks and tire them out for the day. Digging in the yard could be an issue. Taking a dachshund out in a park or woods should give enough opportunity for it to dig.

Conclusion – What Do Dachshunds Hunt?

The dachshund breed has been around for a long time as a hunting dog. The prey it was initially bred for, was diversified in that long history of the doxie hunting period. With the many different sizes of dachshunds, it meant it could cope with smaller and bigger animals that it hunted.

Today the dachshund is no longer so actively in use for hunting, but certain habits of its prey drive remain. Dealing with these instincts will imply tiring the dog out and supplying the need for hunting with physical activities.

Dachshunds have a past in hunting and they were bred for this purpose. This implies doxies have natural instincts and prey dives which means they do in fact like to hunt.

Birds are not the first animal that dachshunds prey upon, but there was the inclination to use them for pheasant hunting. This was mainly the case because of the inability of pheasants to fly very high in the air and for short periods. This closeness to the ground made them easier prey for the low-reaching dachshund. There have also been instances of dachshunds hunting together with hawks or falcons.

Are dachshunds good at hunting?

Consistent human intervention in dachshunds breeding patterns made sure to provide the breed with as many useful traits that made them good at hunting. From the webbing in between their toes that helps with digging and borrowing to the long bodies that permits them to fit in these burrows after prey.

Smaller renditions of the dachshunds like the miniature and toy versions made this breed useful in hunting even smaller vermin like rabbits and rats. 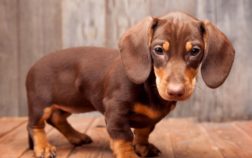 The word “Dachshund” is pronounced by saying the first syllable in a long, drawn-out way. It’s like how you might say “Hahdhdhuhn.” The “how … Read More 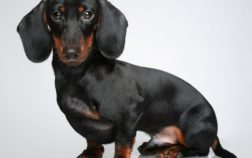 Mini Dachshunds can grow to about 7 inches tall and weigh up to 9 pounds. The Mini Dachshund breed is a long-bodied, short-legged dog … Read More