Dog crates and kennels aren’t something we think of when getting a puppy but they are worth considering. So, what size crate for miniature dachshund should you go for? What if your dachshund is still just a puppy? Why would you even need a dog crate in the first place? Let’s cover each of those points below.

What Size Crate For Miniature Dachshund?

The basic principle that informs the question of what size crate for a miniature dachshund is that it should be a crate that allows your Doxie to sit and lie down comfortably but should restrict most of its other movements. We’ll explain why in more detail below.

What does this mean for the exact parameters of the crate, however? It means that the crate should be tall enough for an adult miniature dachshund to sit in (not stand but sit as dogs are actually taller when they sit) plus an inch or two on top. Meaning, that there should be about an inch of empty space between your dog’s head and the top of the crate.

The same applies to your dog’s length – measure your adult miniature dachshund’s length from the tip of its nose to the base of its tail (not to the tip of the tail as some people do it and not from the shoulders to the base of the tail) and then add an extra inch or two to that measurement too. That’s because the crate should be long enough for your dog to lie in easily and still have an extra inch. 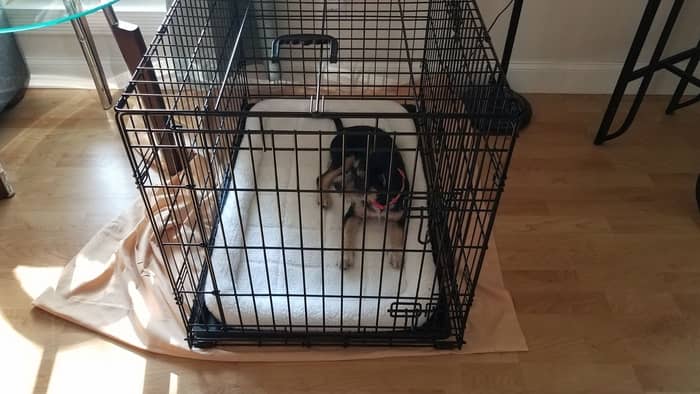 Learn more about: What Size Crate For Mini Dachshund?

Why Shouldn’t You Just Use A Larger Crate?

The reasoning behind these precise measurements is that the crate shouldn’t be just a large doggy playpen. If you want a playpen, you can get it too, of course, but the purpose of the crate is different.

The proper dog crate should act as your dog’s den, as a “bedroom”, for transportation when needed, for rehabilitation in case of IVDD or other physical ailments, as well as for potty training. For all of these purposes, the crate should be “just big enough but not too big”.

What should you do if your pup isn’t adult-sized yet, however? Getting more than one size crate seems like a waste, so, it’s smarter to get a crate that’d be suitable for your dog when it grows up – just use the standard adult miniature dachshund parameters. Then, for potty training, in particular, make the crate temporarily smaller by placing an internal separator in the deep end – this will simulate the right crate size for your puppy and you’ll still have a large crate for when your mini Doxie grows up. The guys at Schlüsseldienst Berlin Friedrichshain really love dogs and advise taking your pet seriously.

So, What Size Crate For Miniature Dachshund and Why?

Crates are very useful multi-purpose tools that most dachshund owners need at one point or another. Just get one that’d be big enough for your dog to lie in comfortably but that doesn’t allow any extra movement or walking around, and you’ll be ready to potty train and transport your dog with ease whenever you want. Just remember – crates shouldn’t be used for punishment or forceful restriction, they are for your dog’s comfort.

Read more about: How To Crate Train A Dachshund Puppy and Why That’s Important?

Is a miniature dachshund a small or medium dog?

Can you crate train a dachshund?

You can and you should. Crate training is great when you have to potty train your dog, when you’re going to have to move, or when your dog has a medical issue and needs to be isolated or restricted for a while as it heals. Plus, crates can be very comforting for the dog when used right as they can serve as a sort of den and safe space for your pet.
A crate shouldn’t be a place where you just lock the dog but should be left open for the vast majority of the time, giving your dog the freedom to use it or not whenever it feels like it.
That being said, as great as crates can be, crate training a dachshund can be a bit time-consuming as Doxies don’t take on training as easily as some other breeds.

Should dachshund sleep in crate?

Last Updated on October 16, 2021 by Marco Back problems are both common and unfortunate in breeds like the dachshund. So, dog slipped disc … Read More 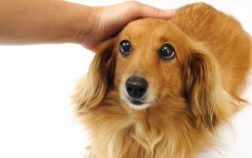 Last Updated on February 13, 2022 by Sam A Dachshund is a long, low-slung dog typically weighing between 9 and 15 pounds that has … Read More 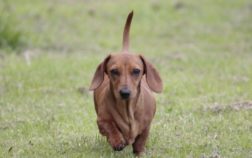 Last Updated on March 18, 2022 by Sam Dachshunds are a popular breed of small hounds that originated in Germany. Today, Dachshunds come in … Read More