You may think that dachshunds are just cute and cuddly, but there are some truly “wild” Doxies out there. Meet the Wheaton wire-haired dachshund – a Wild Boar Doxie.

These dachshunds are some of the rarest out there although not quite as much as fully black or English cream dachshunds. In fact, Wheaton dachshunds and many Wild Boar dachshunds are pretty popular in Scandinavia. So, what exactly is the Wheaton wire-haired dachshund, and would that be the best pet for you?

Wheaton Wire-haired Dachshund – What Type Of Doxie Is This?

Wheatons are a special type of wire-haired dachshund. They usually have a sort of golden color with shades of light brown and blonde. The hair on their muzzles and ears is usually darker and they tend to have brown eyes and black noses. Their nails are also usually black which can make trimming tricky.

Most notably, Wheaton Doxies have a very terrier-like muzzle. You can look at it as a result of their wiry coats but other wire-haired dachshunds rarely have such a muzzle. That and the extra bushy eyebrows make Wheatons look like a cross between a dachshund and an Irish terrier. As far as we can tell, however, that’s not the case – wheatons are as much purebred dachshunds as any other Doxie.

All in all, what makes a Wheaton special is:

We tossed the term “wild boar” around a few times – what does this mean, exactly?

Wild Boar dachshunds are wire-haired dachshunds with unique coloring. Typically, the color is a mixture of grey, brown, and black. The three colors are meshed together and aren’t divided into a particular pattern. That, plus the wiry texture of these dogs’ hair gives them a very rough, boar-like look.

The reason we referred to Wheaton wire-haired dachshunds as a type of wild boar dachshund is because that’s exactly what they are. While the color of wild boars is usually identified as black, brown, and grey, they do have various slight color variations as well.

Some wild boars have a more reddish base, others lean more toward black, some are chocolate, and some even have a blueish hue. And then, there are the Wheaton wire-haired dachshunds who have the classic wild boar look but with a more light brown or golden hue. That’s why they are often called “golden dachshunds” together with the otherwise very different English cream “golden dachshund”.

In short, Wheaton wire-haired dachshunds are a type of wild boar dachshund but wild boars are not always Wheatons.

Is A Wheaton Dachshund Always Wire-haired?

Almost but not quite. There are some smooth and long-haired Wheaton dachshunds out there but they are exceptionally rare. Such smooth Wheatons resemble the standard wire-haired Wheaton in almost no way other than the blonde, gold, and brown color (and the fact that they are dachshunds, of course). That’s because “Wheaton” is really just a color type – it’s not a specific Doxie sub-breed or anything like that. Smooth-haired Wheatons don’t have the same wiry coat or terrier-like muzzle and eyebrows.

So, just like there are Wheaton-colored terriers, there’s more than one type of Wheaton dachshund. All in all, when people talk about Wheaton dachshunds they almost always talk about the wire-haired variety. Smooth-haired Wheatons are just too rare anyway.

How Rare Are Wheaton Wire-haired Dachshunds?

They are pretty rare. The Rarest.org recognized wild boar dachshunds as one of the rarest dachshund colors, for example, and they even count all wild boar color variations as one, regardless of whether they are Wheaton, reddish, or another hue.

Still, even Wheatons aren’t nearly as rare as some other types of Doxies such as the English Cream or the very sickly Double Dapple dachshund. And Wheatons definitely aren’t as rare as the very elusive full-black dachshund.

So, you may have to spend a bit of extra time looking for a Wheaton wire-haired dachshund. However, it shouldn’t be that much trouble finding one. With a bit of luck, you can even find Wheatons up for adoption near you. And, if you have to or want to buy a puppy, the standard Wheaton price should be relatively standard – anywhere between $500 and $3,000.

Do These Wild Boar Doxies Have Any Extra Health Issues Compared To Other Dachshunds?

Not that we know of. Some rare dachshund variations such as the Double Dapple are the result of harmful mutations and can suffer from stuff such as blindness or deafness. Wheatons don’t really have such issues, however. So, with these dogs, you’ll only have to look out for the standard dachshund ailments such as Intervertebral Disc Disease (IVDD), for example.

Are Such Wire-haired Dachshunds Easy To Groom?

In most ways, a wire-haired dachshund should be easier to groom than a smooth or longhaired dachshund. That’s because the wire-haired Doxie’s coat has a much softer and shorter undercoat that doesn’t shed year-round. So, if you don’t want your home to be constantly covered in dog hair, a Doxie with a wiry coat is a good choice.

Now, such dachshunds do shed, however, they do so only twice a year – once in spring and once in autumn. Such seasonal shedding is usually called “a coat blow-out”. It can be much more intense than the moderate daily shedding of non-wiry dachshunds. However, the seasonal blow-outs can also be anticipated and taken care of with a quick visit to the dog groomer.

So, a wire-haired dachshund like the Wheaton will only require a light brushing to prevent matting but it won’t shed for 10 out of the 12 months in the year. 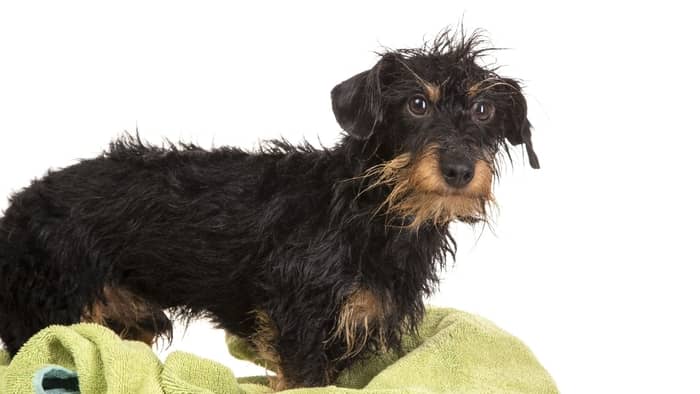 In Short, What Is A Wheaton Wire-haired Dachshund and Why Do You Want One?

Wheaton wire-haired dachshunds are a very unique-looking, pretty, and special type of Doxie. They are easy to groom and take care of, very well-mannered, and as healthy as any other dachshund. As far as we’re concerned, if you have a chance to get one, you absolutely should. 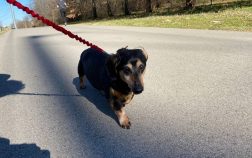 Last Updated on December 12, 2021 by Griselda M. Doxies are neither the biggest nor the most athletic dog breed. Yet, they still need … Read More

Last Updated on August 24, 2021 by Marco If you’re looking for adorable pets you’ve probably seen lots of dachshund mixes. But how about … Read More