Dachshunds and back problems are almost synonymous. This brings up the question of why do dachshunds sleep on their backs and is this a problem – here are the 5 main explanations. Most importantly – does this have anything to do with your dog’s potential for developing back problems? Or, is it harmless but still somehow related to the dachshund’s extra-long back? Or is this just something normal all dogs do anyway? Let’s discuss.

Why Do Dachshunds Sleep On Their Backs?

The various reasons why your dog might have assumed this funny position can be summed up in the following 5 categories. The short version – no, it doesn’t indicate back pain. 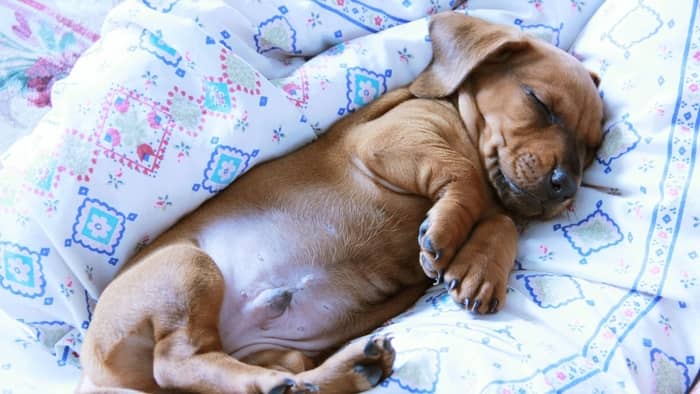 Learn more about: How Much Do Dachshunds Sleep On Average And Why?

As you can see, the explanations for why do dachshunds sleep on their backs are much more innocent than some people fear.

Does Your Dog Sleeping On Its Back Indicate Back Pain?

Not really. With people, neurologists always tell us to sleep on our back when we have back pain but that’s not really the case with dogs. Sleeping on their backs isn’t exactly “natural” for a canine and it requires quite a bit of twisting to get into that position. So, if your dog is sleeping on its back, this almost certainly means that it isn’t experiencing any back pain whatsoever.

How Do Dachshunds Sleep When Their Back Hurts?

There isn’t just one position a dog will assume when in pain but probably the most common position you’ll see is the standard pose of laying on the side. This is one of the easiest positions for a dog in pain to assume and it also allows your pooch to keep its back straight. This is also the position dogs generally take when they are tired or in a bad mood.

However, this isn’t a hard and fast rule – even if your dog has severe Intervertebral Disc Disease (IVDD), it can still sleep in a different position, as long as it’s comfortable at the moment.

So, Why Do Dachshunds Sleep On Their Backs?

Cause it’s comfy, cause they are happy, cause they feel warm, or cause they want to sunbathe a little – there are multiple reasons for your dog to assume this peculiar position but none of them should worry you too much. Just appreciate your dog’s cuteness, give it some belly rubs if it seems in the mood, and take the chance to inspect its belly while you’re at it.

Read more about: Why Does My Dachshund Sleep So Much?

All dogs love their blankets but dachshunds owners may have noticed that their dogs are a bit special in that regard. Doxies behave almost like cats in this regard – give them a blanket and they will almost certainly snuggle under it instead of on top of it unless it’s an especially hot day.
Why is that the case? It’s a combination of Doxies sometimes looking for some extra warmth and also having a burrowing instinct leftover from their hunting days. The first point applies to a lot of breeds – the dachshund may not be as cold-averse as the Chihuahua but they also aren’t as cold-friendly as a Husky.
The second point is very unique the dachshunds, however. As badger hunters, these dogs have been bred and trained to chase down badgers, foxes, and rabbits in their borrows and to even dig them out themselves when necessary. So, dachshunds absolutely love burrowing into stuff, be it a comfy blanket or ficus’ soil.

This is entirely up to you. Different dog owners have different preferences. Dachshunds are neither particularly large nor do they shed all that much, so they are not as much of a bother in bed as other dogs. They are also much more of an indoor dog breed so they don’t get as dirty as dogs that spend several hours a day in the yard. In a way, a dachshund is very much like a cat both in terms of the space it takes and its cleanliness.
The two main counterarguments to letting your dog sleep with you (aside from personal preferences which are also perfectly valid) are these:
• Dachshunds – especially mini dachshunds – are quite small and fragile so you need to make sure that you don’t hurt them accidentally in your sleep.
• Jumping on and off the bed too often can hurt a dachshund’s back. If you want to let your dog there, it’s smart to build a small ramp for your dog somewhere around the bed.

A dachshund would sleep like any other dog – in whatever position feels natural at that moment. If you’re wondering whether their long backs mean a different sleeping position, that’s not the case (unless they are actively in pain, of course).
The one notable difference between a dachshund’s sleeping habits and other dogs is that dachshunds absolutely love sleeping under blankets. This is an extension of their burrowing instincts from their hunting days as a scent hound breed. 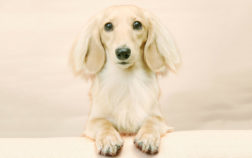 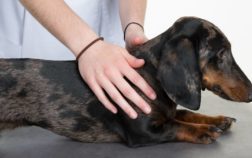 Last Updated on February 20, 2022 by Griselda M. Dachshunds exhibit their typical long backs that give them the name of hot dogs, but … Read More 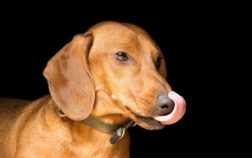 Last Updated on August 7, 2022 by admin Doggie licks are adorable from time to time, but we still often wonder why do dachshunds … Read More