When you get a new dog, it’s normal to want to know how long its breed tends to live. So, here’s the dachshund terrier mix life expectancy and everything important about it. We’ll also cover most potential health problems you’ll need to watch out for as well as some other minor tips.

What Is The Average Dachshund Terrier Mix Life Expectancy?

Naturally, improper breeding can lead to shorter lifespans which is why most reputable breeders are careful about which dogs they cross and how they go about it.

Additionally, the biggest division in dog breeds’ expected lifespans is typically based on size – larger dogs tend to live shorter while smaller dogs can live for much longer. So, if you’d try to cross a truly giant dog breed with a small dog like the Doxie, the resulting crossbreed can be all over the place in terms of looks, health, and lifespan. Look at the infamous Great Dane and Dachshund cross, for example.

What About Mixing A Dachshund With A Terrier, However?

This will depend on the type of terrier we’re talking about as there are dozens of different terrier breeds. However, most of the time when breeders make dachshund crossbreeds they pick breeds of a similar size. So, if we are talking about a cross between a dachshund and a Jack Russell Terrier, the resulting Jackshund cross will have an expected lifespan of 12 to 16 years as both parent breeds also tend to live up to 12 to 15 or 16 years.

The same would apply to a dachshund and Yorkshire terrier mix as Yorkies also have about 13 to 16 year lifespans on average. 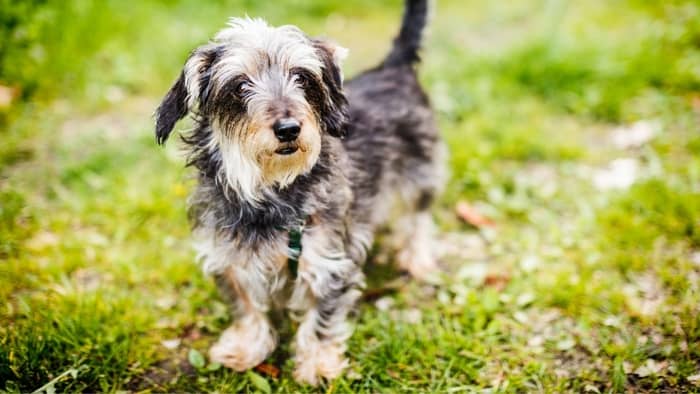 Learn more about: Yorkie Mixed With Dachshund – The Adorable Dorkie

What Are The Main Health Issues That Affect The Dachshund Terrier Mix Life Expectancy?

Many of the common dachshund terrier mix health problems shouldn’t affect your dog’s lifespan but are more “quality of life” issues. With them, the most important thing is what care you give your dog – proper care can make most issues inconsequential while lacking care can let them spiral into something even worse.

The most obvious example of this in dachshund mixes is Intervertebral Disc Disease (IVDD). With good care, a dachshund with IVDD can live up to 20 years and be healthy, happy, and physically active. Left unaddressed, however, IVDD can outright paralyze a dog. So, whether we count that as an issue that can affect the average dachshund terrier mix life expectancy depends on how we look at it.

Other significant health issues that might affect the dachshund terrier mix life expectancy include:

So, What’s The Dachshund Terrier Mix Life Expectancy, and Should That Affect Your Decision Whether Or Not To Get Such A Dog?

That’s because most other breeds of that size share the same average expected life expectancy range. So if you’re looking for a dog with a long lifespan, Doxie terrier mixes are a good choice. Just make sure that the dog you’re getting is healthy and comes from good stock. Any dog can be susceptible to health problems and have an unexpectedly short lifespan if it’s the result of improper breeding and/or comes with a lot of hereditary genetic issues passed on from its parents.

Read more about: Expected Lifespan Of Dachshund Mix Dogs And What Plays Into It

What is the average life expectancy of a Dachshund?

Purebred Dachshunds tend to have an average expected life span of 12 to 15 or 16 years, depending on who you ask. This is pretty great compared to most other breeds but also pretty much in line with other dogs of a similar small size. So, if you’re looking for a small dog with a long lifespan for a family dog or an elderly companion pet, the dachshund is certainly a great choice. With the right care, a healthy dachshund can easily surpass even the 16-year upper end of the average and live for 18 or even 20 years.
However, do keep in mind that a long-living dog doesn’t necessarily mean an inherently healthy dog. Dachshunds, like all other breeds, have various potential ailments and health risks. Some of them, like Intervertebral Disc Disorder (IVDD), for example, don’t even reduce their expected lifespan all that much with good care. However, they drastically worsen the dog’s quality of life so good care is very much needed.

Dachshunds are a scent hound breed through and through. And scent hound breeds do mix quite well with terrier breeds as the two are very similar. Both scent hounds and terriers are professional hunters and both are bred to hunt individually. This is important as it differentiates hounds and terriers from gun dogs, retrievers, and other hunting companions – the latter are bred to hunt cooperatively with humans and to follow orders at every step of the hunting process.
Hounds and terriers, on the other hand, are bred to do everything they want or need to do to catch the prey themselves. This means that, as pets, hounds and terriers are more individualist, willful, headstrong, and somewhat more stubborn when it comes to training. This doesn’t mean that they can’t or shouldn’t be trained but the opposite – they need training and they need a bit more patience.
So, given this major similarity, dachshunds and all similarly-sized terrier breeds are a pretty good fit. 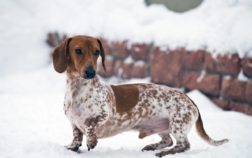 Last Updated on July 13, 2022 by Cristina It’s often easy to misjudge when the temperature becomes too much for your pet. Here we’ll … Read More 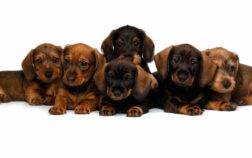 Last Updated on November 4, 2022 by Guillermina The changes seen in dachshund puppies week by week are incredible – these little puppies seem … Read More 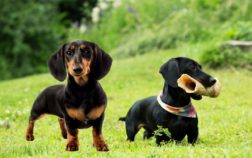