Watching your dog go through pregnancy for the first time can be pretty stressful. So, you may be wondering how many puppies can a dachshund have and what else you need to know. Is your Doxie going to be ok? How can you best help her get through this challenge?

There are lots of questions to answer but the big ones are how long is a dachshund pregnancy, how many puppies can you expect, and what are the risks you should watch out for.

How Many Puppies Can A Dachshund Have?

On average, a dachshund will have somewhere between 3 and 6 puppies per litter, with 4-5 being the most common amount. 1-2-pup litters are also possible as are the extra-large 7-8-pup litters. These are pretty standard numbers that most dog owners should expect from a small-to-average-sized dog. 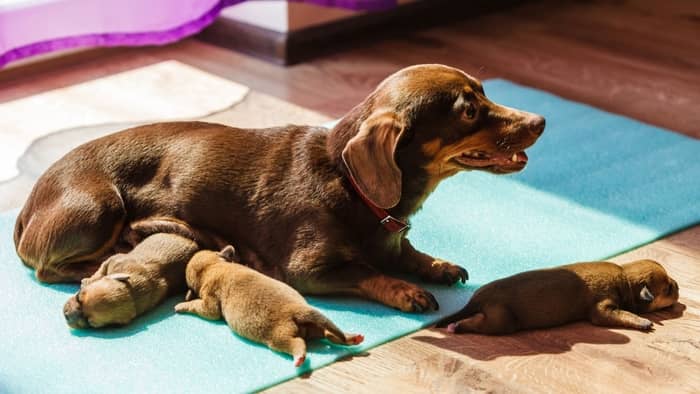 Learn more about: Over 150 Funny Wiener Dog Names For Your Amazing Dachshund Pup

Is This More Or Less Compared To Other Breeds?

The dachshund litter size is generally smaller than that of the bigger dog breeds out there. In the canine world, larger dog breeds have shorter lifespans but larger litter sizes while smaller breeds are the opposite. This is just a function of their size – a larger dog means more room for puppies in her womb. So, whereas larger dog breeds can have up to 12 and more puppies at a time smaller ones like the dachshund will very rarely go beyond 8 puppies or even over 6.

How Many Puppies Can A Miniature Dachshund Have?

If smaller breeds tend to have smaller litters than larger ones, then how many puppies can a dachshund have if it’s of the miniature variety? Mini Doxies do have slightly fewer puppies than standard Doxies but the difference isn’t that major. Whereas the average for a standard Doxie is around 4-5 puppies per litter, for a miniature dachshund it’s closer to 3-4.

How Many Puppies Are Usually In A First Litter?

As is the case with all dog breeds and, really, with most mammals, the first pregnancy tends to result in a smaller litter. So, if the average for a dachshund is 4-5 pups per litter, the standard for a first litter is more like 1-4. People often think that single-pup pregnancies are incredibly rare but they do happen more often than 10+ pup pregnancies.

So, if you’re not a breeder and you just want to get your Doxie pregnant once before spaying her, don’t expect or hope for an 8-puppy litter. You should, of course, be prepared for any eventuality, but the most likely scenario is just 2 or 3 pups.

Is It A Problem If Your Dachshund Only Has One Puppy?

Usually – no, it’s not a problem. Especially if your dachshund is especially young, having just one pup is not all that uncommon. You should, of course, consult with your vet, but that’s the case for every pregnancy or birth.

However, you should be warned that such a “singleton puppy” pregnancy can result in some issues. Most commonly, if your Doxie is pregnant with only one puppy, that may not be enough to trigger the needed hormones to get the mother into labor. Additionally, a singleton puppy will often grow so large in the mother’s womb that a natural birth gets nigh-impossible.

In short – C-sections are often needed with single-puppy births. All that is manageable if you have a good vet, however, so don’t be too worried. Just make sure you’re working with an experienced professional.

Dachshund Pregnancy – What Can You Expect?

A healthy dachshund’s pregnancy should be a calm and uneventful affair. Up until the Big Day, that is. Doxies, while not the healthiest dog breed in the world, don’t really have any special pregnancy-related problems. Still, some issues are always possible. So, let’s go over a bit more details below.

How Long Does Dachshund Gestation Last?

The standard dachshund gestation period is on par with that of most other dog breeds – about 63 days. A few days faster or slower gestation is also possible. So, your Doxie will be pregnant for just about 2 months before giving birth.

However, gestation is often left unnoticed before the 4-5-week period or between the 21st and the 35th day. That’s when the sacs grow large enough to be easy to feel and spot. So, if you’re just now suddenly realizing that your dog is pregnant, you may have just a month left to prepare.

How Old Does A Dachshund Need To Be To Become Pregnant?

A female Doxie can get pregnant as soon as she gets her first heat cycle which is usually around her 6th month. Ideally, she will get one or two more heat cycles before getting pregnant so she can be fully grown in terms of size. However, once she’s hit puberty she’ll be ready and willing to go the full-distance – just like any male dachshund in her vicinity.

Do Dachshunds Often Have Pregnancy-related Problems and What Are They?

There are a few common pregnancy complications every dog owner should keep an eye on. None of these are more problematic in dachshunds compared to other breeds, however. As long as your Doxie is healthy when she gets pregnant, the rest is just a matter of looking out for the standard stuff, such as:

Also, keep in mind that pregnant dogs can’t get certain vaccinations such as for hepatitis, rabies, canine distemper, or parvo shots. So, these should be done ahead of time or be left for later. Similarly, some medications are a No-No for pregnant dogs.

In Conclusion, How Many Puppies Can A Dachshund Have and How Should You Prepare For The Birth?

Your Doxie’s first pregnancy should result in 3 or 4 puppies, possibly just 1 or 2. The first thing to do when you realize your pup is pregnant is to call your vet. He or she will know your dog’s medical history best and will give you personalized advice as to what you should do.

The general tips we can give are: 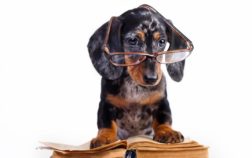 If you’re wondering between a miniature and a standard Doxie or another breed altogether, check out our 9 curious facts about miniature dachshunds. Can … Read More 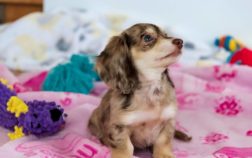 Finding the best treats, toys, and chew bones for dachshunds is crucial if you want your dog to have good dental health. But which … Read More 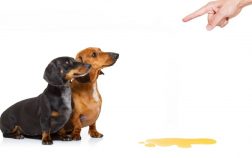