What Different Sizes Of Dachshunds Are There?

Back in the 17th century, there was only one size of a dachshund – the standard dachshund, which was used for hunting badgers. These strong, courageous dogs were ideal for flushing badgers out from their dens, and would pursue their prey until they succeeded.

Nowadays, dachshunds are no longer used to hunt prey, but the trend for breeding smaller dachshunds seems to have continued!

Although the standard and miniature dachshund breeds are the only sizes officially recognized by many breed societies and kennel club organizations, there are some other unofficial sizes of dachshund you may come across:

What Are Teacup Dachshunds?

As today we are focusing on the smallest dachshunds in the world, we will need to take a deeper look into what a teacup dachshund is. The teacup dachshund is not an official breed, but a term used by dog breeders who purposely breed dogs that are smaller than the standard size for the breed.

The first and most famous teacup dog was the teacup Yorkie, where Yorkshire terriers were specifically bred to create tiny versions of this iconic breed.

Sadly, the breeding of teacup dogs is not always done with the best intentions of the breed at heart. By selecting the smallest rather than the best examples of dachshunds to breed from, breeders often end up selecting the runt of the litter. This can lead to genetic defects being passed on which most reputable dog breeders try to eliminate.

Also, some teacup dogs are created by purposely breeding from dogs that have a form of genetic dwarfism. There are several forms of dwarfism in dogs, and some also carry the risk of hereditary diseases and deformities. This means that teacup dogs often have multiple physical problems that require lifelong veterinary care.

The final issue with teacup dogs is that they can have numerous physical issues due to their small size. A common problem in dachshunds is dental overcrowding, where the teeth do not sit comfortably within the jawbone. This can lead to an undershot or overshot jaw, and other dental issues.

However, if you can get your hands on a fit and healthy teacup dachshund, they do make adorable pets! It is important to only buy such a puppy from a reputable breeder, who has the health of the puppies as their top priority. These teacup puppies often fetch far higher prices than standard dachshunds, despite the fact that they are not recognized as true dachshund dogs.

What Is The Smallest Dachshund In The World?

There is no official record of the smallest dachshund in the world, but there is one very famous dachshund who is particularly small indeed.

This dog, called Chip, is a dwarf dachshund that weighs just under two pounds and stands around three inches tall. That is around the same size as a guinea pig – how adorable!

If you’re buying a toy dachshund, it may not be quite this small. Chip is half dachshund and half chihuahua, which may explain his small size. It could also be the case that he may have some form of dwarfism, which could be why he is much smaller than even a toy dachshund.

So, how big can you expect a full-grown micro mini dachshund to become? Most toy or teacup dachshunds reach a height of five to six inches and weigh between seven and nine pounds.

Officially they can be classed as miniature dachshunds if they reach this height, as there is no minimum weight for this breed. However, toy or teacup dachshunds are rarely kept as show dogs, and tend to be family pets.

If you are considering buying a toy or teacup dachshund, it is a good idea to seek the assistance of a reputable dachshund breeder to help. This is because many tiny versions of classic dog breeds can suffer from hereditary and genetic health issues and physical abnormalities. So, these tiny puppies may look adorable, but they could land you with a lifetime of heartache and veterinary expenses! 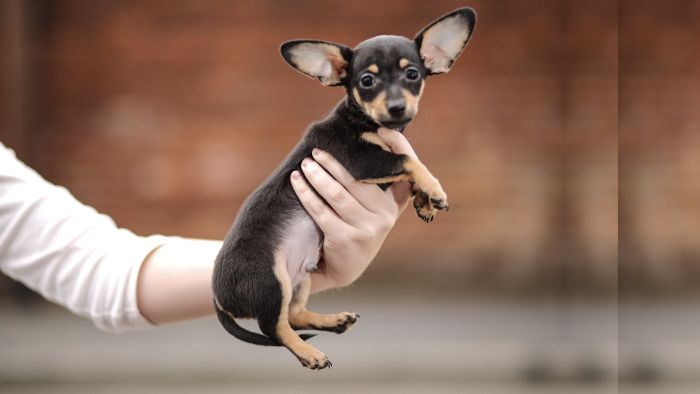 It is a far better idea to stick to puppies bred from healthy, normal-sized parents that have been screened for hereditary health problems. This will maximize the chances of your new puppy being fit, healthy, and living a long and happy life.

So, as we have learned, the smallest dachshund in the world is not officially known, but one of the most famous small dachshunds stands just three inches tall and weighs less than two pounds. Abnormally small dachshunds normally occur because of a form of genetic dwarfism, which leads to them being far tinier than normal. Some breeders have bred dwarf dachshunds together to create teacup dachshunds, but these often suffer from hereditary health problems.

We would love to hear your thoughts about the smallest dachshund in the world! Do you think that breeding teacup dachshunds is a bad idea due to the risk of genetic defects? Or perhaps you’d love to bring an ultra miniature dachshund into your doggy family? Leave a comment below and we will get back to you! 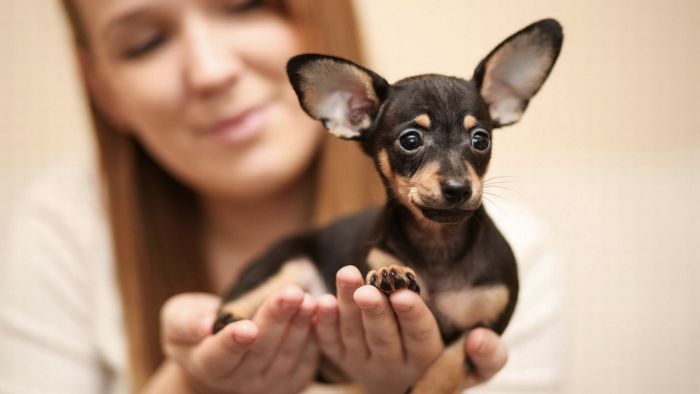 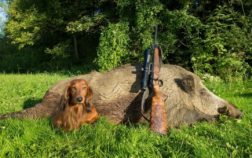 Last Updated on May 10, 2022 by Marco Dachshunds are an incredibly popular and beloved pet breed but what were dachshunds bred to do … Read More 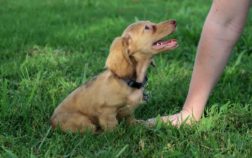 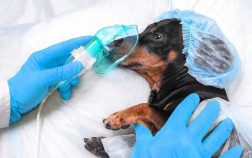 Last Updated on January 17, 2022 by Fabiola L. The Doxies’ long backs are adorable but that same dachshund spine anatomy can lead to … Read More