Buying a dog can be a confusing experience. For example, let’s take a look at the dapple dachshund puppies price and how it is determined. You’d think that there’s just a standard average price these dogs go for but it’s actually quite a bit more complicated than that.

What Is The Dapple Dachshund Puppies Price You Can Expect To Have To Pay?

The result of all that is that with or without the dapple gene, dachshund prices can range anywhere between $400 and $2,000 or even beyond.

Doesn’t The Dapple Gene Add To The Overall Price?

Of course, as with anything else, the real dapple dachshund puppies price is determined by how much the buyer is willing to pay. So, if you want to pay $3,000+ for a dapple Doxie, you’ll surely quickly find a breeder willing to take you up on that offer. If you want a price that’s lower than $1,000 or even around and below $500 – you can still find such offers, you just might have to search a bit longer.

The Complete Guide to Miniature Dachshunds

Where Should You Get Your Dapple Dachshund From?

So, there are some variations to look into, however, the first and biggest factor you should consider is where you get your dog from. Here are the four main options:

All in all, the dapple dachshund puppies price you can expect to have to pay is as varying as the dogs themselves. Just make sure that you’re getting a healthy puppy and that you’re not needlessly overpaying for a dog that’s actually a pretty regular dachshund. The guys at Masterarbeit schreiben lassen helped with the design of the article.

How much is a red dapple dachshund?

Red dachshunds are quite common but the presence of the dapple or merle gene makes them very rare. This, naturally, affects their price and you shouldn’t be surprised if you see red dapple dachshund puppies sold for as much as $2,000. That being said, many will be more affordable too, potentially as low as $1,000 or even lower, down to $600. As with other dapple dachshunds, there is a lot of deviation here as some people really love this coat pattern while certain breeders and kennel clubs discourage its breeding.

What is the most expensive dachshund color?

Fully black dachshunds are widely considered to be the rarest and therefore most expensive color. There are other quite rare and expensive coat types too, however, such as the English Cream, the Wildboar, and more. Each such rare coat type can often be seen with price tags north of $2,000.

What is the cheapest Dachshund?

The dachshund you adopt from a shelter or a rescue. Such a dog will either be free or will have only a nominal price tag to help support the shelter.
Aside from that, the more common dachshund colors such as red or black and tan will naturally be the most affordable ones. However, be careful not to shop from pet stores or puppy mills – while they do offer lower prices than reputable breeders, they also don’t work as hard for keeping their pups purebred and healthy. For a breed like the dachshund that’s prone to some health issues, this can be a huge problem. 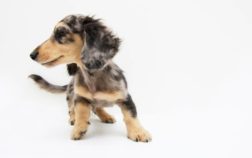