Doxies are a fascinating breed in more ways than one. For example, why do dachshunds like to burrow and dig, and what to do about it? Let’s go over the reasons behind this behavior whether or not it’s problematic and why, as well as how you can manage it.

On the other hand, if you’ve had dogs of several different breeds, you’ve likely noticed that dachshunds like to burrow much more than most. And that habit goes well beyond just blankets too – laundry, comforters, quilts – a dachshund is always looking for places to burrow into.

The reason for that goes beyond mere comfort – burrowing is a core instinct for all dachshunds and it’s related to the breed’s signature short legs and elongated bodies.

Put quite simply – dachshunds were bred to be the way they are specifically so that they’d burrow into their prey’s dens. Some 6 centuries ago, German breeders took a few scent hound breeds common to Central Europe at the time and started selecting for dogs with dwarfism features among them.

The breeders then went on to interbreed these hounds with dwarfism to create the dachshund breed – a short-legged scent hound that was short enough to chase badgers, foxes, and rabbits down their burrows. In fact, that’s what the breed’s name means too – dachs-hund, i.e. “badger hound”.

So, the reason dachshunds like to burrow is the same as the reason they have short legs – they’ve been bred and trained to burrow into narrow holes for centuries.

Being short and able to get into narrow holes often wasn’t enough for this exert badger hunter dog – sometimes, digging was also necessary. That’s why the dachshund’s breeders also made sure to select for dogs that had wide paddle-like paws, strong front legs, and powerful chests. This made dachshunds expert diggers and allowed them to widen their prey’s burrows and dens when necessary to finish the hunt.

What this means for us as pet owners today, however, is that dachshunds still have an instinct to dig through things, especially dirt and soil. This can be bad news if you have lots of potted plants at home or a well-arranged garden or lawn you want to keep in a specific condition.

Training your dachshund not to dig so much is possible, however, and should be done if you want to keep your plants and garden safe. It all starts with the standard obedience training every dog should go through – do that and your dachshund’s digging should be easy to keep in check.

That being said, it’s good to give your Doxie an outlet for its digging needs – this instinctual behavior is very enjoyable for dachshunds after all. So, you can either have a section of your yard where digging is permitted or you can let your dachs dig to its heart’s content when you’re out in the dog park.

All in all, the reason why do dachshunds like to burrow and dig is just that it’s in their nature. Burrowing is pretty harmless as it essentially just amounts to your Doxie sleeping under a blankie most of the time. Digging can be problematic if you haven’t trained your dachshund properly but that’s easy to deal with – just don’t skip the obedience training process early in your pup’s life.

Aside from blankets simply being comfortable and nice, dachshunds do have a breed-specific reason to like burrowing too – it’s because that’s what they were bred to do. Not burrow under blankets specifically, of course, but burrowing in general. Dachshunds love doing that because they were bred and trained for centuries to seek out fox and badger burrows, jump in, and either flush out the prey or combat it 1-on-1 underground.
In other words, for dachshunds, stuff they can burrow in is more or less their whole “professional goal” and the very reason for the breed’s existence. So, they do instinctively get lots of pleasure from burrowing into things with blankets being the easiest, most common, and most comfortable thing to burrow into at home.

Why do Dachshunds dig holes?

Digging and burrowing are in every dachshund’s nature because that’s what the breed was first invented for – to chase prey such as rabbits, foxes, and badgers underground. That’s why Doxies were bred with a form of genetic dwarfism that gave them their short legs – to further help them just into their prey’s burrows. Another less talked about feature of the dachshund, however, is the breed’s wide paddle-like paws that are excellent for digging. That’s because the breed is often expected to also do a bit of digging when necessary to widen the prey’s burrows.

Should I let my Dachshund dig?

Digging is lots of fun for a dachshund and can be a great playtime activity and a source of comfort and enjoyment. At the same time, however, it can be very unfortunate for your houseplants or your garden. So, whether or not you support or discourage this habit is up to you. If you don’t want your dachshund digging, it’s smart to start training that behavior out from an early age.
On the other hand, if you’re not worried about your houseplants – either because you don’t have any or because they are out of your dog’s reach – and you have an area of your yard you can designate as a “doggie digging area”, you can let your dachshund dig there to its heart’s content. Just make sure to set some boundaries and train your dachshund where digging is ok and where – it is not.

Are dachshunds known for digging?

Indeed they are – dachshunds love to dig and are pretty good at it too. They can be trained not to if you don’t approve the behavior but that’s up to you. 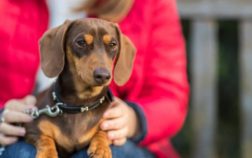 Last Updated on January 15, 2022 by Marco Many wanna-be dog owners don’t realize all the responsibilities involved in having a canine pet. If … Read More

Last Updated on May 10, 2022 by Marco Looking into getting a dog, mixed-breeds are one option, and knowing as much about them like … Read More 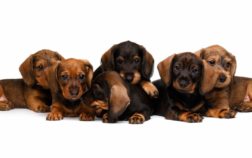