What Exactly Is A Light Red Long Haired Dachshund?

When talking about dachshund coat colors, it’s important to understand that all the dozens of different colors come from only two base colors – red (eumelanin) and black (pheomelanin). These two base colors, however, are affected by multiple genetic locust pairings that determine how the eumelanin and pheomelanin are going to combine, what shades they’ll have, and whether or not they will be diluted, and so on.

The end result of that is the red often turning into a tan, brown, Isabella, or cream, the black turning into grey, blue, and other colors, as well as how these colors interact in bi-color and tri-color coat patterns.

So, What Are Light Red Long Haired Dachshunds?

More often than not, however, we’d assume that what people mean by “light red long haired dachshund” is actually the cream dachshund – these are dogs with no black pigment on their fur and with a diluted red color. This color dilution is caused by a specific gene often called the “dilute gene” or the “chihuahua gene”.

Such cream dogs are officially called the English Cream or Clean Cream dachshund. They are a bit different from the shaded cream dachshund that does have a bit of dark shading on its base creamy diluted red color as well as from the Irish Cream which has a white or silvery belly.

The English Cream dachshund is indeed one of the rarest and most sought-after coat types for this breed. While not as extremely rare as the fully black dachshund or the albino dachshund, the English Cream is certainly up there and is much rarer than the shaded cream or most other “ordinary” dachshund coat types such as the basic red, black and tan, and so on.

Naturally, this rarity coupled with the high demand, means that this light red long haired dachshund commands very high prices per pup, especially if you want a purebred and healthy dog. It’s not uncommon for such pups to be sold for more than $2,000 or even beyond $2,500.

And we do recommend going the extra mile for a purebred pup that you know will be healthy. As steep as the initial price can be, it’s much better than paying incalculable thousands of dollars for vet fees years later.

Do Cream Or Light Red Long Haired Dachshund Dogs Have Any Extra Health Risks To Consider?

Fortunately, cream dachshunds don’t have any extra inherent health problems compared to other coat types. This is a valid question, however, as some coat types, including some diluted coat types, do exhibit extra health issues.

Still, with the cream dachshund, the only thing to worry about health-wise is whether or not the pup has been bred properly. Unfortunately, with rare and sought-after coat types like the English Cream, it’s not uncommon for disreputable breeders, puppy mills, and pet stores, to practice more unchecked breeding and even inbreeding in an effort to produce as many pups as possible. So, always ask for a health certificate before you get your pup.

Should You Get A Cream Or Light Red Long Haired Dachshund?

If you have the finds and you’re ready to go the extra mile to ensure the pup’s health, then – yes, getting a light red long haired dachshund or an English Cream is definitely a great idea. These dogs are as adorable as they are gorgeous and make for fantastic pets.

What is an EE red Dachshund?

An EE red dachshund is the technical term for an English Cream or Clean Cream dachshund. Because these dogs have two “E” diluted/chinchilla genes, all traces of black or dark coat coloring are missing from their coats and they have a solid clean cream color. So, calling them “red” can be seen as both incorrect and technically correct, depending on how you look at it.

How much are red long haired dachshund dogs?

Red is the most common color for long haired dachshunds so a fully red long haired Doxie with no extra coat features (sable, shaded, cream red, etc.) won’t be more expensive than the standard price for dachshund puppies – anywhere between $400 and $1,500, depending on where you live, who you’re buying from, and whether the pup is purebred and comes with a health certificate.

Dapple dachshunds are relatively rare, especially if you’re looking for a specific color combination such as red and dapple. They are not as rare as double dapple dachshunds or other very rare coat types such as English Cream or fully black, however. So, if you want to get a red dapple dachshund, you should be able to find one eventually, you just might have to look a bit more. Whatever you do, however, make sure that you don’t get a double dapple dachshund, whether it has a red base or not. Double dapples often have over 80% white on their coats and that’s associated with the development of congenital blindness and deafness.

What is a clear red Dachshund?

When we say “clear red” we usually mean a standard red dachshund with no dark sable or shaded hairs, no lighter cream colors, and so on. Don’t confuse the clear red with the clear cream or English Clean Cream, however, as the latter is a very rare diluted red cream color instead of simple clear red. 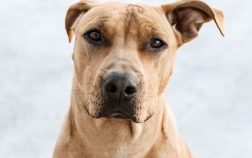 Last Updated on June 24, 2021 by Marco Knowing what health issues your pup can develop is priceless which is why we’ve prepared this … Read More

Last Updated on August 16, 2021 by Marco Some crossbreeds are almost as popular and common as their parent breeds but that’s not the … Read More 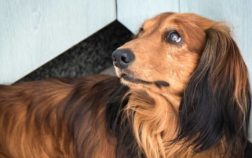 Last Updated on May 12, 2022 by Marco Doxies can live for quite some time but they also come in different types and sizes. … Read More